UCC National CEO Ihor Michalchyshyn has recently completed a tour to south west Ontario along with UCC Ontario Provincial Council President Bohdan Wynnyckyj. On Saturday April 6 Bohdan and Ihor arrived in Windsor.  They were given a tour of local Ukrainian landmarks by Petro Mycak, including the very prominent Holodomor monument at the city’s central park. 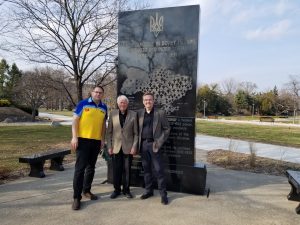 Later that afternoon a community meeting was held at the UNF Hall in Windsor.  Around 20 community leaders were in attendance for a presentation from both Ihor and Bohdan.  A lively discussion followed on the opportunities for closer cooperation on projects such as Holodomor Education, Russian disinformation and cultural events.  Both Ihor and Bohdan were presented with a book “Ukrainians in Windsor” which tells the history of the community.

On Sunday April 7, Ihor and Bohdan were in London Ontario, where they visited the Ukrainian churches in London prior to church services.  They also saw the memorial to Cpl Filip Konowal at the Garden of Memories on Veterans Way. A community meeting was held at the London Ukrainian Centre, a large and popular venue in the city, early in the afternoon.  More than 40 community members were in attendance for the meeting.  One of the interesting discussion items was exploring ways to better involve youth and students from Ukraine who attend local colleges and universities. 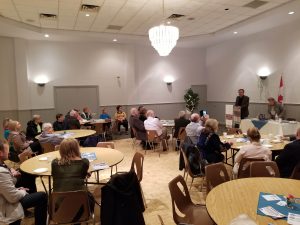 Many thanks to Carole Guimond, VP of the UCC Windsor Branch and Daria Hryckiw, President of UCC London Branch, for organizing and hosting the community meetings.

Bohdan and Ihor were interviewed by Stefan Andrusiak for the Nasha Kasha radio program in London on a variety of topics, you can listen to the interview here: