Many thanks to Veterans Affairs Canada, the Royal Canadian Legion National Headquarters and the Military Family Resource Centre – National Capital Region, for meeting with the delegation and sharing information about their programs and services. 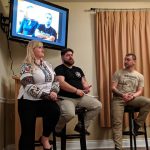 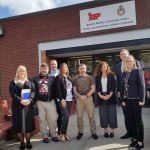 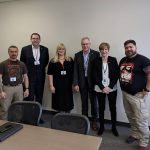 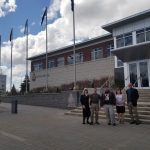 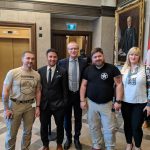 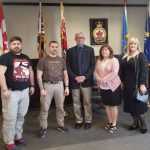 A re-integration and adaptation program for Ukrainian war veterans and their families. Povernennya is a joint project of registered Canadian federal charity Dopomoha Ukraini – Aid Ukraine, Ukrainian charity fund Нове Покоління – Міжнародний Благодійний Фонд, Help Us Help The Children (HUHTC), and Ukrainian NGO Побратими (Pobratymy).  To date, this partnership has conducted seven sessions that have included over 70 families and 200 veterans, wives, and children.

Since 2014, over 350,000 individuals have taken part in the Anti-Terrorism Operation (ATO) in Eastern Ukraine. However, the government of Ukraine has not yet introduced satisfactory and standardized measures to prevent or mitigate the negative impact of combat operations on veterans and their families. According to recent studies, approximately 10 individuals from a veteran’s immediate circle of friends and family are affected by the veteran’s experience of participating in an armed conflict. This means that veterans who are negatively impacted by the conflict spread that negative impact to 10 other people. This project is aimed at mitigating the negative impact on the families of veterans through psychological trainings, direct support, and post-combat assistance.

Training participants are provided with information and tools of psychological reorientation and adaptation, enabling them to effectively help themselves and their families overcome the negative consequences of combat and train them to assist others in similar situations, by strengthening the professional-guided peer-to-peer support network for veterans. The trainers who take part in the program are either veterans of the war, or wives of veterans who had previously completed the peer to peer training program over the past five years, as well as military psychologists who served in a professional capacity on the front line since 2014.

Candidate families are vetted both by Pobratymy and the Kyiv office staff of Dopomoha Ukraini – Aid Ukraine. The program is reserved for veterans that have returned from the war, demobilised and do not plan on returning to combat. It is designed to help families that are struggling to restructure their family unit and bring it back to what it was before the war. Combatants of war experience various mental and physical traumas which they then bring home with them. The family until is permanently altered as soon as someone goes to war. These traumas, experiences, injuries and stresses not only affect the soldier, they affect the entire family.