Statement on Ontario Bill 97 and Holodomor

Join Vyshyvanka Day Celebrations Across Canada!10 May 2019Next

May 11, 2019 Statement by UCC CEO Ihor Michalchyshyn on Ontario Bill 97 and the Ukrainian Holodomor

The Ukrainian Canadian Congress (UCC) is extremely disturbed to see that the organizers of the “Immortal Regiment” Toronto, the group “Russian Heritage of Canada” (Русский Мир Канады), and the group “United communities of Canada”, are actively bragging on social media that they worked to remove reference to the Holodomor from Bill 97, the Ontario Legislature’s bill to proclaim Genocide Awareness, Commemoration, Prevention and Education Month, introduced by Mr. Aris Babikian, (MPP, Scarborough-Agincourt).

Alla Suvorova, who presents herself as the president of Русский Мир Канады and the organizer of “Immortal Regiment” Toronto, stated that “Our two organizations, thanks to whom the ‘Immortal Regiments’ took place in Toronto and Ottawa, were able to ensure that the reference to the Holodomor- genocide of Ukrainians, was removed from the bill! We promised to support Bill 97 […] on the condition that the point about the Holodomor as a genocide of Ukrainians will not be there. The MPP who promotes the bill came to our Immortal Regiment. He saw how strong and friendly our community is, how many of us there are, and immediately agreed to our conditions and gratefully accepted our support.” (translated from Russian, original below)

The UCC calls on MPP Babikian to publicly clarify his relationship with these groups and their supposed role in Bill 97. The UCC calls on the Ontario government to immediately clarify its views on this matter and include reference to the Holodomor in Bill 97, as well as to condemn all forms of genocide denial.

We are extremely troubled by attempts to whitewash the horrendous crimes of Communism and present Soviet totalitarianism in a positive light appear.  Denial of the genocide of the Ukrainian people –   lines up with the official Russian state view of the Holodomor. 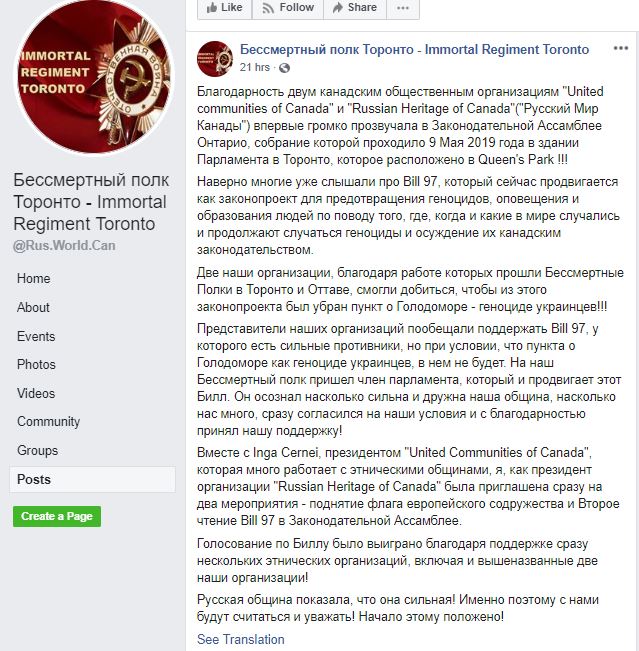 A photo of MPP Aris Babikian meeting this week with a group including the person we quoted in our original release at Queens Park is also below. (source: Facebook)

Background by the Central and Eastern European Council in Canada, Glorification of Soviet Symbols of Occupation and Terror on Canadian Streets Must Be Condemned