UCC expresses condolences on the passing of Mykhailo Romach

UCC expresses condolences on the passing of Mykhailo Romach 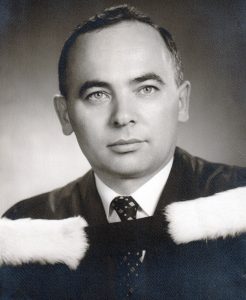 The Ukrainian Canadian Congress expresses sincere condolences to the friends and family of Mykhailo Romach, who died on September 13, 2019, in Toronto, at the age of 94. Dear husband of Olha, and father of Myroslava (Edward), cherished grandfather of Kateryna (Andrew), Anna (Andriy), Alexandra (Ryan) and treasured great-grandfather of Zakhar.

During his entire life in Canada, he was a committed activist and volunteer in the Ukrainian-Canadian community. He received numerous awards for these community and humanitarian activities, including a Taras Shevchenko Medal from the Ukrainian Canadian Congress in 1986. He will be remembered by all who knew and worked with him for his quiet dedication, hard work and honourable nature.

Visitation will be held at Cardinal Funeral Home, 92 Annette Street, Toronto from 6-9 pm on Tuesday September 17, 2019 with a Panakhyda at 7:30 pm. Funeral mass will be at the Ukrainian Catholic Church of the Holy Protection of the Mother of God, 30 Leeds St.  (Ossington and Bloor Sts.), Toronto on Wednesday, September 18, 2019 at 10:00 am followed by interment at St. Volodymyr Ukrainian Cemetery in Oakville.

In lieu of flowers, the Romach family has asked for donations to the UNF Foundation or the Ukraine Paediatric Fellowship Program Fund, SickKids Foundation.