November 4, 2019. OTTAWA, ON. Yesterday, the historic XXVI Triennial Congress of Ukrainian Canadians concluded in Ottawa. The Congress set the direction and elected the leadership of the Ukrainian Canadian Congress (UCC) for the next three years.

Alexandra Chyczij was unanimously re-elected President of the UCC. Chyczij thanked the newly-elected UCC Board of Directors for their commitment to serving the Ukrainian Canadian community. The XXVI Congress adopted a series of resolutions that established priorities and will guide the work of the UCC for the next three years. 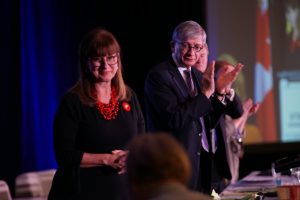 “It is both a tremendous honour and an enormous responsibility to lead one of the most dynamic and diverse ethnocultural communities in Canada,” stated Chyczij. “The vision for the future shared by the delegates these last three days is one of a vibrant, forward-looking Ukrainian Canadian Congress that is responsive to the needs of our community. I am certain that together we will ensure that this vision becomes a reality!”

Earlier in the day, delegates and guests of the Congress heard a captivating and thought-provoking keynote address from Andriy Kulykov, who spoke about civil society, the media landscape, and the future of democratic development in Ukraine. 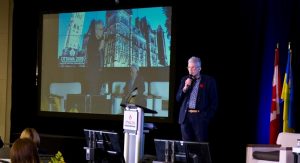 Following the adjournment of the Congress, a delegation of the UCC paid tribute to Canada’s war veterans at the National War Memorial.

A full recap of the work of the XXVI Congress will be published in the coming days.