November 20, 2019. OTTAWA. On November 21, Ukrainians all over the world mark the Day of Dignity and Freedom. Six years ago, the Ukrainian people took to the streets to defend their choice to live in liberty and democracy.

On November 21, 2013, demonstrations began in response to the government’s decision not to sign the EU-Ukraine Association Agreement. On November 29-30, the regime responded with violence, and security forces attacked and beat student protestors on Kyiv’s Independence Square (the Maidan). In response, Ukrainians in cities and towns across the country rose up in mass demonstrations. So began the Revolution of Dignity.

Months of demonstrations were met with increasing repression and retribution by the state. But in the face of growing violence ordered by the regime, growing arrests and attacks, the Ukrainian people bravely defended their inalienable right to freedom. The people demanded that their government hear and heed their voice – they would not be denied their right to be treated with dignity.

On February 18-20, 2014 at Kyiv’s Maidan, the Yanukovych regime ordered security forces to open fire upon their own people. But the Maidan withstood the regime’s attack, and the regime retreated. Yanukovych fled Ukraine, abdicating his office, and Ukraine’s parliament appointed a new government.

Over 100 brave Ukrainian patriots were killed in those February days. Their names and their faces are today etched upon stone in Ukraine’s capital. They shall forever be remembered as the Heavenly Hundred – Небесна Сотня – and they gave their lives so that Ukraine may be free. We honour their memory. Вічная Пам’ять.

The Revolution of Dignity was an expression of a nation’s resolve to live in freedom, of the Ukrainian people’s centuries-long struggle for self-determination. Through their courage and their unity, the Ukrainian people cemented their right to choose their own common destiny.

Today, as so many times through history, Russia wages war against Ukraine, seeking once again to subjugate the Ukrainian people to Moscow’s tyranny. On the battlefields and in the trenches of eastern Ukraine, Ukrainians fight for the ideals of the Revolution of Dignity.  The Ukrainian people are defending their country and their homes with valour, bravery and unity of purpose. The cause of the Ukrainian people is the cause of free peoples the world over, and with God’s help, they will be victorious. 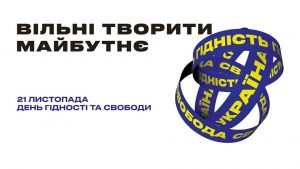