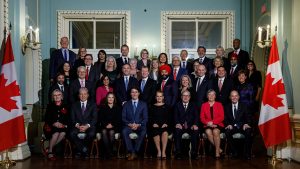 November 21, 2019. OTTAWA. The Ukrainian Canadian Congress (UCC) congratulates Canada’s Cabinet Ministers who were sworn in yesterday at Rideau Hall. The UCC wishes Canada’s Prime Minister, the Right Honourable Justin Trudeau, and Canada’s Cabinet all success in their service to Canada and looks forward to continuing a productive and effective relationship with the Government of Canada.

“On behalf of the UCC, I congratulate Canada’s Ministers on their appointments. We look forward to working with Canada’s new Cabinet,” stated Alexandra Chyczij, National President of the UCC. “In particular, I would like to personally congratulate the Honourable Chrystia Freeland, a Ukrainian Canadian, on her appointment as Canada’s Deputy Prime Minister and Minister of Intergovernmental Affairs. Вітаємо!”

“The UCC looks forward to continuing to work with the Government of Canada and all political parties and Members of Parliament on these issues of importance to our community,” stated Ihor Michalchyshyn, UCC CEO. “These policy positions reflect a broad range of views in our community and will guide the UCC’s ongoing policy discussions with federal decision makers.”