How Ukrainian culture is thriving in francophone Lévis02 December 2019Next 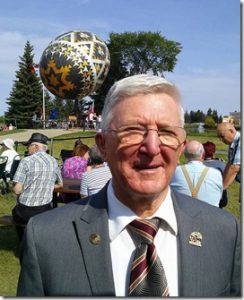 It is with great sadness that I announce the passing of my father Paul Sembaliuk on November 26, 2019 at the age of 90. A graduate of Alberta College of Art and Design, Paul was a graphic artist for the Government of Alberta for 31 years, his contributions to the visual identity of the province and the Ukrainian Canadian community are his legacy. He is most noted for the design and project management of the world’s largest Easter egg – the Vegreville Pysanka. Among his many other graphics achievements are the Alberta display for Expo 67, the design of the 1970s “Alberta” logo, and the renowned logo for the Cheremosh Ukrainian Dance Ensemble. Paul was also responsible for the visual identity of many of Alberta’s historic sites and parks, and had a special interest in the Ukrainian Cultural Heritage Village – as it reflected his own Ukrainian Heritage and his home town of Willingdon in Alberta’s “Kalyna Country”.

Paul grew up during the era of the threshing crew when people and communities came together to help each other out. He took that forward into his life, and whenever there was a project Paul turned it into a way to involve as many people as possible – to have fun and help out the community. He hired students before ‘hire-a-student’ was a thing, and mentored many young art graduates, archivists, and historians as they transitioned into their careers. Like his parents, Paul, along with his wife Pat, also had an open door policy – whether it was a need for temporary lodging, time to think, or as tourists just traveling through – everyone was always welcome at the Sembaliuk’s.

A mover and shaker in the community, Paul loved to support friends in the achievement of their goals – such as the Ukrainian Bilingual Program, Heritage Days, multicultural programming, political campaigns, and the UAlberta Malanka celebrations. He extended his hospitality for round table discussions, strategy sessions, and social networking at his home in Edmonton, and later Victoria. His dedication to family, friends, and community will be missed.