For over five years, Mr. Sentsov was illegally imprisoned by the Russian regime for his support of Ukraine’s territorial integrity and sovereignty and because of his opposition to Russia’s invasion of Ukraine. Released in September 2019, today Mr. Sentsov fights for the release of all other Ukrainians who are captives of Russia’s war against Ukraine.

“Putin and his regime understand only the language of strength. International pressure on the Russian regime must be significantly strengthened in order to compel Russia to end its war against Ukraine and withdraw its forces from occupied Ukrainian territory,” stated Mr. Sentsov. “Canada and the international community need to increase personal and economic sanctions against the Russian regime in order to secure the release of Ukrainian citizens illegally imprisoned by Russia.”

“The UCC was honoured to welcome Mr. Sentsov to Canada, and to hear his call in support of the political prisoners suffering at the hands of the Russian regime,” stated Alexandra Chyczij, National President of the UCC. “His story of courage in the face of the unimaginable cruelty of his Russian jailers is an inspiration, and the UCC will continue to advocate strongly for the rights of all Ukrainians imprisoned by Russia.”

Members of Parliament Yvan Baker (Etobicoke-Centre), James Bezan (Selkirk-Interlake-Eastman) and Heather McPherson (Edmonton-Strathcona) co-organized a roundtable meeting with Mr. Sentsov and Members of Canada’s Parliament on February 4. Mr. Sentsov was also recognized in the House of Commons by MP Baker.

“The UCC thanks MPs Yvan Baker, James Bezan and Heather McPherson for their staunch advocacy in support of Ukraine in the face of Russian aggression,” stated Ihor Michalchyshyn, UCC CEO. “It was very valuable for Canadian Members of Parliament to hear Mr. Sentsov’s story and his views on how Canada can best continue to support Ukraine.”

In partnership with PEN Canada and the Postcards for Prisoners Project,  the UCC hosted a screening of The Trial: The State of Russia vs. Oleh Sentsov at the Human Rights Watch Film Festival in Toronto. Mr. Sentsov also met with the Ukrainian Canadian community at an event organized by the League of Ukrainian Canadians. The UCC National Office hosted Mr. Sentsov in Ottawa in cooperation with the Embassy of Ukraine to Canada.

In Ottawa, Mr. Sentsov met with the Ukrainian Canadian community, at a meeting co-hosted by Members of Parliament Baker, Bezan and McPherson and co-hosted by the UCC Ottawa branch. Mr. Sentsov also met with officials at the Department of Global Affairs Canada and spoke at a public event at the University of Ottawa, co-hosted by the Human Rights Research and Education Centre and the Chair of Ukrainian Studies, and co-sponsored by the Canadian branch of the International Commission of Jurists. 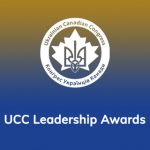