February 11, 2020. TORONTO, ON. The Ukrainian Canadian Congress (UCC) honoured Roman Waschuk, former Canadian Ambassador to Ukraine and his spouse Oksana Smerechuk for their contributions to public service and Canada-Ukraine relations at a special Tribute Gala in Toronto on February 1.

Due to the generosity of our sponsors and supporters, $100,000 was raised to support the Roman Waschuk and Oksana Smerechuk Fund, within the UCC Charitable & Educational Trust, which funds the UCC Parliamentary Internship Program, as well as the UCC Community Development Fund, which supports important community programming initiatives.

“Ambassador Waschuk and Ms. Smerechuk have dedicated their lives to public service. They are an example for future generations of Ukrainian Canadian youth to emulate, and the UCC Internship Program will provide our youth with opportunities to start their careers,” stated Alexandra Chyczij, National President of the UCC. “On behalf of our community, I thank Roman and Oksana for kindly agreeing to support the UCC’s programming. Thank you to all the honoured guests, generous sponsors and donors, and everyone attending for making this memorable evening a wonderful success!”

To view a report from Kontakt TV from the Gala, please click on the image below: 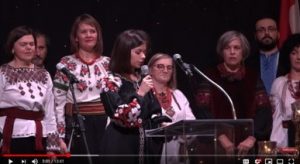 The evening’s program featured greetings from Canada’s Prime Minister, the Right Honourable Justin Trudeau, an address by the Honourable Chrystia Freeland, Deputy Prime Minister of Canada, a superb performance of the Huron Christmas Carol Iesus Ahattonnia by the St. Nicholas Ukrainian Catholic Church Choir, and moving and poignant tributes by close friends Velida Kent and Christopher Shapardanov. Karim Morcos and Sofiya Yusypovych were skillful Masters of Ceremonies for the evening.  But the highlight of the evening was Roman and Oksana’s response to the accolades they received.

Roman Waschuk was presented the UCC Taras Shevchenko Medal, for his outstanding contribution to public service. The Shevchenko Medal is the highest form of recognition granted by the UCC.

Successful public service and effective diplomacy always being the result of teamwork, the UCC also honoured Oksana Smerechuk, Ambassador Waschuk’s spouse, who was President of the Ambassadors’ Spouses Club of Kyiv. Together their commitment to community and public service and boundless energy provided Canada with a powerful voice in Kyiv.

A special thank you to the Tribute Gala Organizing Committee, chaired by Olya Grod, for their hard work and dedication.

To view photos from the Gala, please click here and here