UCC Statement on 75th Anniversary of Victory in Europe Day

Waschuk-Smerechuk Tribute Gala07 May 2020Next

Their Name Liveth For Evermore

May 8, 2020. OTTAWA. Today marks the 75th anniversary of Victory in Europe Day (V-E Day). On May 8, 1945, Nazi Germany surrendered to the Western Allies and the Soviet Union. World War II in Europe, which began with the German-Soviet invasion and occupation of Poland, ended.

Today we unite in solemn commemoration of the millions of victims of the most brutal war ever inflicted upon humanity and in eternal gratitude to those who fell in the service of our country in the struggle for freedom. The memory of the Nazi German death camps and the blood-soaked battlefields of Europe warn us of man’s capacity for evil and instills in us an eternal vigilance against inhumanity.

“More than one million Canadians and Newfoundlanders served in the Second World War with more than 45,000 paying the ultimate price. Canadian soldiers participated in all of the major European theatres including the Italian Campaign, liberations of Holland, Belgium and France, defence of the United Kingdom, army operations and bombing of Germany and the Battle of the Atlantic,” stated Captain (Retd) Andre Sochaniwsky CD, President of the Ukrainian War Veterans Association of Canada. “It is estimated that more than 40,000 Ukrainian Canadian served in Canada’s armed forces in World War II, approximately one in ten Ukrainian Canadians fought for Canada. Today we honour their service and remember their contribution in defence of our freedom.”

On the Western front, the Western Allies liberated Europe from Nazi despotism. With the Allied Forces, freedom and peace returned to western Europe. On the Eastern Front, Stalin’s Soviet Union brought more subjugation, death and oppression to the captive nations of eastern Europe. Liberation and deliverance from tyranny would come to eastern Europe only decades later with the downfall of Communism and the collapse of the Soviet Union.

Today, that freedom is again under threat. Russia once again wages war and seeks to subjugate Ukraine to Moscow’s tyranny. Ukraine’s brave sons and daughters take up arms and defend their country and their liberty. We are certain that the Ukrainian people will be victorious, for their struggle is just and their cause is righteous.

On May 8 at 10am EDT, there will be a service of prayers at St. James Church in London, UK, for the peace of the world and to give thanks for the service and sacrifices of all who served in the Second World War, including Ukrainian Canadian troops stationed in the Vicarage in those years. The service will be broadcast on the St. James Church Facebook page. To view the service, please click on the image below: 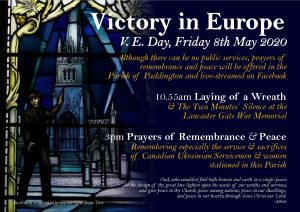 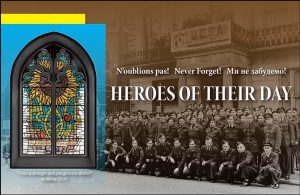 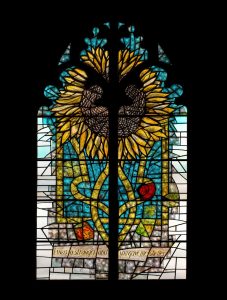 Globe & Mail: Veteran who helped bring 30,000 Ukrainian refugees to Canada to be honoured in the U.K.

Edmonton Journal: Opinion: This VE-Day, remember the sacrifices of Ukrainian-Canadians