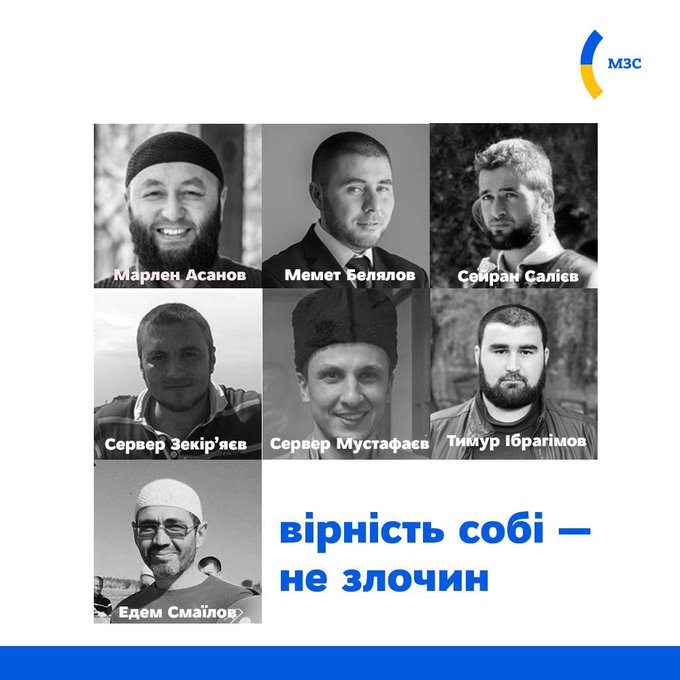 The UCC calls on Canada and the international community to respond strongly and swiftly to Russia’s violations of basic human rights and implement sanctions against the Russian officials responsible.

Today, the Southern Military Regional “court” in Rostov-on-Don sentenced seven Crimean Tatar civic journalists and activists to prison terms of between 13 and 19 years. Marlen Asanov, Memet Belyalov, Timur Ibragimov, Seyran Saliyev, Server Mustafayev, Server Zekiryayev, and Edem Smailov were sentenced to jail for no “crime” other than their courageous resistance to Russia’s illegal occupation of Crimea, the ancestral homeland of the Crimean Tatar People and an integral part of Ukraine.

“The draconian sentences handed down today by the Russian “court” against these political prisoners are an affront to justice and internationally recognized human rights,” stated Alexandra Chyczij, National President of the UCC. “Canada and the rest of the civilized world must react strongly to the systemic campaign of terror undertaken by the Russian occupying regime against Crimean Tatars and anyone else who opposes Russia’s occupation of Crimea.”

Over 100 citizens of Ukraine are illegally imprisoned by the Russian regime. The Russian “investigators,” “prosecutors,” and “judges” and officials responsible for their illegal detention are publicly known. The UCC calls on the Government of Canada to use Magnitsky legislation more robustly, in the way it was intended, to hold Russian officials to account for their human rights abuses against Ukrainian prisoners being detained illegally in Russia, and to sanction the perpetrators of religious and cultural persecution against Crimean Tatars.

Background on the case from the Kharkiv Human Rights Protection Group is available here: Russia’s offensive against Crimean Tatar civic journalists and activists