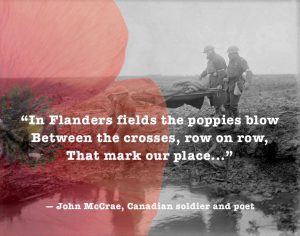 The UCC Charitable and Educational Trust announced a $1000 donation to The Royal Canadian Legion Dominion Command Poppy Trust Fund to support veterans of Canada’s Armed Forces and the work of the Legion.

“We owe the veterans of our Armed Forces a debt that can never be repaid. Their courage, selflessness and commitment to duty and country ensure that we may live in peace and in freedom,” stated Demyan Hyworon, Chair of the Trust. “As we approach Remembrance Day on November 11, the UCC Charitable and Educational Trust is proud to support our veterans, their loved ones, and the work of the Royal Canadian Legion.”

Tickets can be purchased by clicking on the image below:

Over 40,000 Canadians of Ukrainian descent served in the Canadian military to fight for Canada against Nazi, Fascist and Imperial Japanese tyrannies. The Ukrainian enlistment percentage was the highest of any ethnic group outside of the British. “A Canadian War Story” is directed by award-winning Canadian Director John Paskievich.

The film is based on first person testimonials of Ukrainian Canadian soldiers and chronicles their experiences in service to Canada in World War II. Spanning continents and generations, the film recounts the remarkable Ukrainian Canadian coming of age journey from Europe to Canada and to the battlefields of Europe and Asia.

This is the Digital Premiere of the film and the very first time that it is being viewed publicly. The film will be introduced by Lieutenant General Paul Wynnyk (Ret’d) CMM MSM CD, former Vice Chief of the Defence Staff and Commander of the Canadian Army.

The film screening will be followed by a Q&A with the film’s creators.

The trailer for the film can be viewed here: