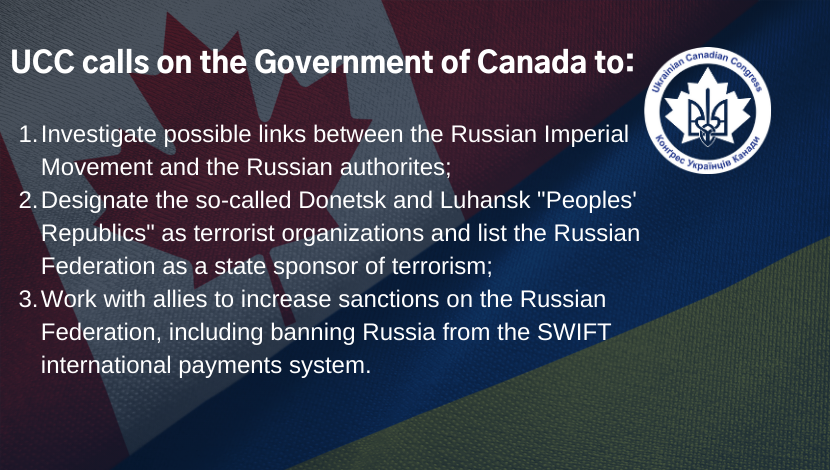 “Extremist, terrorist organizations such as the RID and the government that harbours them are a clear threat to global security. Today’s listing of the RID is an important step in keeping Canadians safe,” stated Alexandra Chyczij, National President of the UCC. “We applaud today’s announcement and call on the Government of Canada to investigate the RID’s possible links to the Russian authorities.”

In April 2020, the UCC wrote to the Honourable Bill Blair, Canada’s Minister of Public Safety and Emergency Preparedness urging the Government of Canada to list the RID as a terrorist entity and to take stronger action in response to Russia’s war against Ukraine. The UCC’s letter is available here

Credible reports have exposed the RID’s involvement in Russia’s military invasion of Ukraine in Crimea and eastern Ukraine.

The RID has also been linked to Igor “Girkin” Strelkov, a former colonel of Russia’s Federal Security Service (FSB). Strelkov has been indicted by Dutch prosecutors for his role in the downing of Flight-MH 17, a civilian airliner shot down on July 17, 2014 over Russian-occupied eastern Ukraine by a Buk missile system originating from the 53rd Anti Aircraft Missile brigade, a unit of the Russian army from Kursk, Russia. All 298 people on board were murdered.

Today’s announcement from the Government of Canada is available here