Heroes of the Heavenly Hundred19 February 2021Next 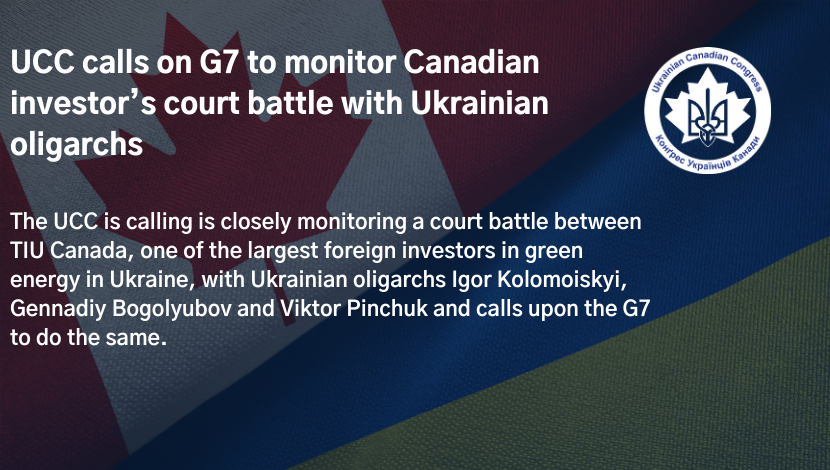 February 19, 2021. OTTAWA. The Ukrainian Canadian Congress (UCC) is closely monitoring a court battle between TIU Canada, one of the largest foreign investors in green energy in Ukraine, with Ukrainian oligarchs Igor Kolomoiskyi, Gennadiy Bogolyubov and Viktor Pinchuk and calls upon the G7 to do the same.

Last week, TIU Canada was informed that their application to the Kyiv Commercial Court to restore the connection of their solar power plant in Nikopol, Ukraine to the power grid, which they say was illegally disconnected in March 2020 by the Nikopol Ferroalloy Plant at the direction of its oligarch owners.

“TIU is appealing the case to the Northern Commercial Court of Appeal in Kyiv and the UCC calls upon the G7 to monitor the proceedings closely,” stated Alexandra Chyczij, President of the UCC.  “Close scrutiny of the courts that are intended to guarantee the impartial application of the law is one way of trying to ensure that Ukraine’s justice system does not benefit powerful oligarchs. A fair and impartial justice system and an economic system based on market principles and equality of opportunity are key pillars of successful democratic states.”

Prior to the disconnection, Ecotechnik Nikopol, a wholly owned subsidiary of TIU, managed a 10MW solar power plant which successfully produced and sold electricity for two years and was considered a Canadian success story. Losses in the year since the disconnection from the power grid are estimated at $2 million and TIU is at serious risk of defaulting on its bank loan and could forfeit the power plant valued in excess of $15 million.  The plant is an attractive target in Ukraine, which is known for corporate raider attacks by unscrupulous oligarchs who operate with impunity in a country where much needed justice and economic reforms have stalled.

Ukraine’s President Zelenskyy ran on an anti-corruption platform and has pledged commitment to reform and closer integration with the European Union.

Last week, the European Parliament adopted a resolution on the progress made under the EU Ukraine Association Agreement. The resolution states in part, “despite notable progress, widespread corruption continues to hamper Ukraine’s reform process […] oligarchs seem to be regaining political influence […] reforms are also being impaired by internal institutional instability and contradictions, the lack of clear benchmarks, weak capacity, limited resources and external factors such as the COVID19 pandemic, as well as by a lack of political resolve to accept and ensure the full independence of judicial and economic institutions and to avoid a selective use of justice.”

The UCC endorses the recommendations of the G7 Ambassadors and urges Ukrainian authorities to implement the measures suggested by Ukraine’s allies.