Canada must stand against human rights abuses in Russian-occupied Crimea 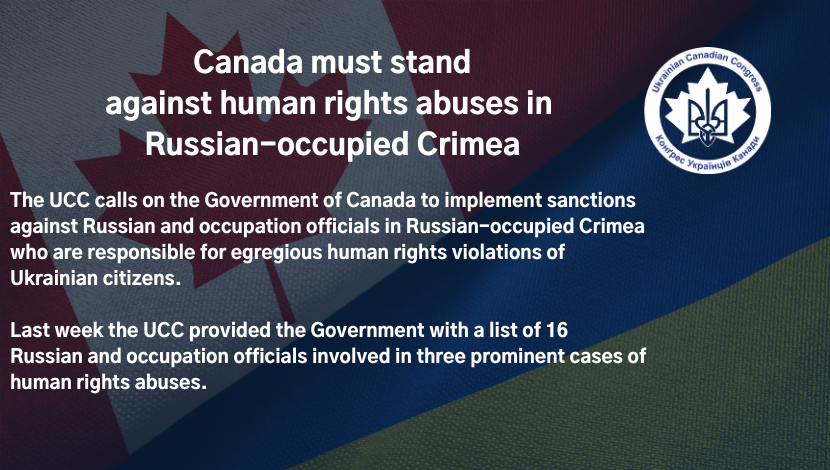 March 3, 2021. OTTAWA, ON. The Ukrainian Canadian Congress (UCC) calls on the Government of Canada to implement sanctions against Russian and occupation officials in Russian-occupied Crimea who are responsible for egregious human rights violations of Ukrainian citizens.

Last week the UCC provided the Government with a list of 16 Russian and occupation officials involved in three prominent cases of human rights abuses.

“The Magnitsky Act, adopted in 2017, gives our government the authority to implement sanctions against officials responsible for gross violations of internationally recognized human rights,” stated Alexandra Chyczij, National President of the UCC. “To date, the Government of Canada has not used this legislation to target officials responsible for the regime of terror that has gripped Crimea since Russia’s invasion in 2014. We call upon Canada to do so now.”

Since Russia’s invasion of Crimea seven years ago, the occupation regime has violated internationally recognized human rights and engaged in political persecution, violence and systemic discrimination against Crimean Tatars and ethnic Ukrainians.

Working with international human rights NGOs to identify the perpetrators of the violation of the human rights of Kuku, Mustafayev and Kurbedinov, the UCC provided the Government of Canada with a list of 16 Russian and occupation investigators, prosecutors, and judges involved in these cases. The UCC calls on the Government of Canada to immediately implement sanctions against these officials.

The briefing note provided to the Government of Canada by the UCC is available here: