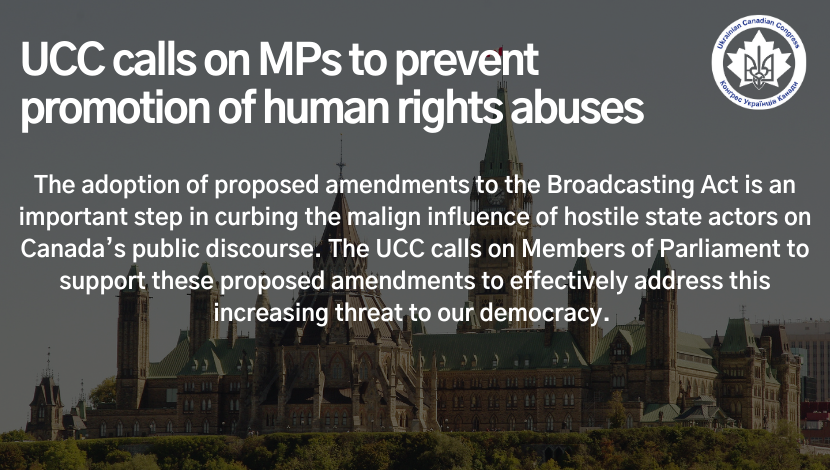 April 15, 2021. OTTAWA, ON. The Ukrainian Canadian Congress (UCC) calls on Members of Parliament and the House of Commons Standing Committee on Canadian Heritage to support proposed amendments to the Broadcasting Act that would prevent the promotion of human rights abuses by non-democratic, authoritarian states.

The proposed amendments, introduced by Members of Parliament Alain Reyes (Richmond—Arthabaska) and Garnett Genuis (Sherwood Park-Fort Saskatchewan) and would amend the Broadcasting Act to prohibit the issuing or renewal of broadcast licences to broadcasters that are “subject to direction or control by a foreign state that is not a democratic state or that is committing, or is governed by a party who has committed, genocide or crimes against humanity.”

Of particular concern to the Ukrainian Canadian community are the ongoing malign actions in Canada of the Russian Federation, which for seven years has waged a war of aggression against Ukraine.

The 2019 Annual Report for the National Security and Intelligence Committee of Parliamentarians found that:

“The Russian Federation engages in foreign interference activities across Canada’s political system with the objective of influencing government decision-making and swaying public opinion. […] The nature and extent of Russia’s foreign interference threat is significant as these activities form a key component of the broader national security threat posed by Russia. […] Foreign states use ethnic and mainstream media to spread messages and forward their own agendas. *** The PRC and the Russian Federation both manipulate mainstream and ethnic media. […]

The Committee believes that these states target Canada for a variety of reasons, but all seek to exploit the openness of our society and penetrate our fundamental institutions to meet their objectives. They target ethnocultural communities, seek to corrupt the political process, manipulate the media, and attempt to curate debate on postsecondary campuses. Each of these activities poses a significant risk to the rights and freedoms of Canadians and to the country’s sovereignty: they are a clear threat to the security of Canada.”