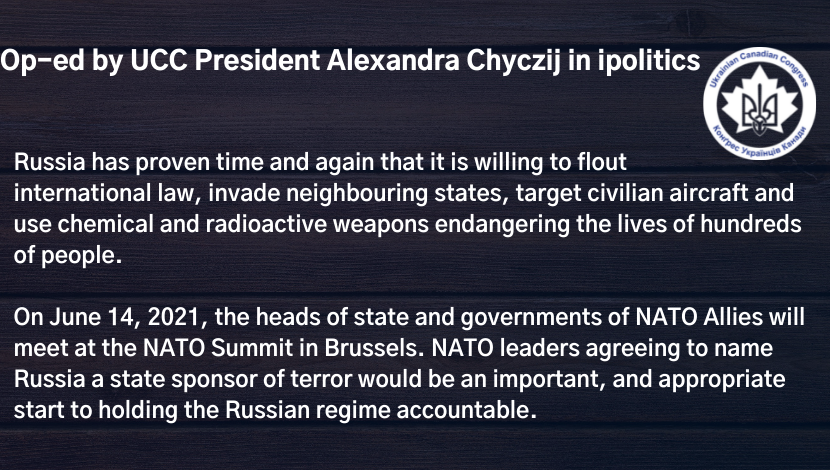 This op-ed by UCC President Alexandra Chyczij was published by ipolitics on May 12. To read the op-ed at ipolitics, please click here

On Nov. 22, 2006, a man died an agonizing death three weeks after drinking tea in a London hotel.

On Oct. 16, 2014, an explosion occurred at an arms depot in Vrebtice, Czech Republic, killing two people.

On March 4, 2018, a man and his daughter were poisoned in Salisbury, England.

What do these four seemingly unconnected events have in common? The Russian government was behind all of them.

The man who died on Nov. 22, 2006, was Alexander Litvinenko, a Russian dissident who was poisoned by polonium, a radioactive weapon, by the Russian Federal Security Service (FSB).

Czech authorities concluded two weeks ago that the 2014 explosion at the arms depot in the Czech Republic was carried out by agents of the Main Intelligence Directorate of the General Staff of the Russian Armed Forces (GRU).

The man and his daughter, Sergei and Yulia Skripal, were poisoned by a military-grade nerve agent — Novichok, a chemical weapon — again, by GRU agents.

These are the actions of a rogue regime that is a threat to world peace.

Russia has proven, time and again, that it’s willing to flout international law, invade neighbouring states, target civilian aircraft, and use chemical and radioactive weapons, endangering the lives of hundreds of people.

As this pattern of destruction wrought by Putin’s regime becomes clearer, one wonders how many more attacks the Russian government is responsible for that we don’t know about yet.

Most nations define terrorism as an act committed “in whole or in part for a political, religious, or ideological purpose, objective, or cause,” with the intention of intimidating the public “with regard to its security, including its economic security, or compelling a person, a government, or a domestic or an international organization to do or to refrain from doing any act.”

These four acts — the assassination and poisoning of opponents of the Russian regime, bombing an arms depot on foreign soil, the military invasion of a foreign country, and the subsequent downing of a civilian airliner — are all clearly acts carried out for a political objective.

The fact that Russia is willing to brazenly carry out these attacks on foreign soil means that no one, anywhere, is safe. Evicting Russian diplomats will not deter Russia from further attacks. In fact, a weak response will only embolden the regime further, and will result in more deaths and suffering. That’s why it’s important that our governments protect us by labelling Russia what it is — a terrorist state.

In 2018, Colorado Sen. Cory Gardner introduced a bill that would have required the U.S. State Department to make a determination within 90 days about whether the Russian Federation should be designated as a state sponsor of terror under U.S. law. Unfortunately, the legislation failed to make it through the legislative process before the election of a new Congress.

Recently, both the United States and Canada listed the “Russian Imperial Movement” (RID) as a terrorist organization. The RID has been linked to Russia’s invasion of Ukraine and to individuals involved in the downing of Flight MH-17. It would be improbable that, in a repressive police state such as Russia, this organization could function without the knowledge and support of the Russian state.

On June 14, 2021, the heads of state and governments of NATO allies will meet at the NATO summit in Brussels. NATO leaders agreeing to name Russia a state sponsor of terror would be an important and appropriate start to holding the Russian regime accountable.

Designating Russia as a terrorist state would place Russia firmly where it belongs — together with the world’s worst state actors, such as Iran and the murderous Assad regime in Syria — and would limit Russia’s ability to access foreign assistance, dual-use technologies, and foreign financing. It would also be a strong moral signal to the Russian regime that its malign actions and attacks have consequences.