Door to NATO is open; Ukraine must take advantage

Update on LCBO letter22 June 2021Next 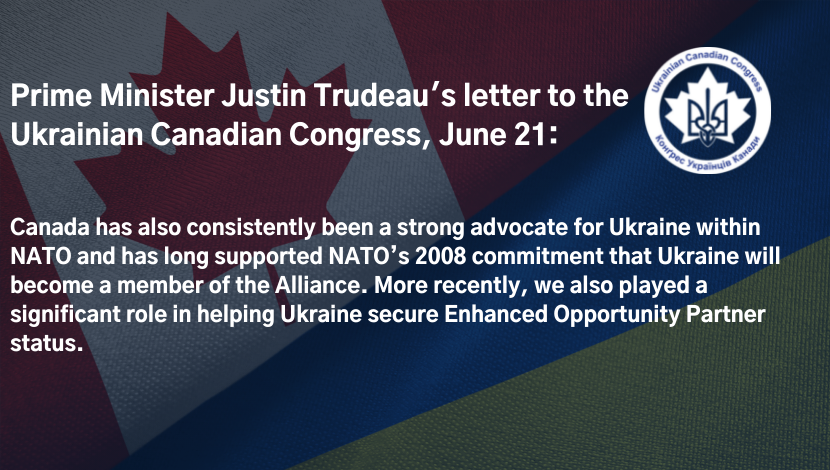 JUNE 23, 2021. OTTAWA, ON. The Ukrainian Canadian Congress (UCC) welcomes the reaffirmation by NATO leaders that Ukraine will become a member of the Alliance. Ukraine’s authorities must take advantage of this opportunity and strengthen efforts to implement reforms necessary to accede to NATO. The UCC looks forward to working with the Government of Canada to enhance support for reforms in Ukraine.

On June 21, Canada’s Prime Minister, the Right Honourable Justin Trudeau, wrote in a letter to the UCC: “Canada’s commitment to Ukraine’s sovereignty, security, and territorial integrity remains unwavering and our position on Russia is unequivocal. Canada will continue to hold Russia to account for its unacceptable behaviour. […] Canada has also consistently been a strong advocate for Ukraine within NATO and has long supported NATO’s 2008 commitment that Ukraine will become a member of the Alliance. More recently, we also played a significant role in helping Ukraine secure Enhanced Opportunity Partner status.”

“Since 2014, the Ukrainian people have courageously defended the values upon which the Free World was built and the principles along which NATO was founded. NATO membership for Ukraine is essential in ensuring the return of peace to Europe. Ukraine in NATO would deter further Russian aggression both against Ukraine and other European states,” stated Alexandra Chyczij, National President of the UCC. “Canada, as one of Ukraine’s closest friends, has a long record of success in supporting vital reforms in Ukraine.”

At the recent NATO Summit on June 14, the leaders of the Alliance stated, “We reiterate the decision made at the 2008 Bucharest Summit that Ukraine will become a member of the Alliance with the Membership Action Plan (MAP) as an integral part of the process […] We stand firm in our support for Ukraine’s right to decide its own future and foreign policy course free from outside interference.”

The NATO Leaders also stressed the reforms that Ukraine must implement to reach the goal of NATO membership. These include:

“Through Canada’s military training mission in Ukraine, Operation UNIFIER, the Defence Reform Advisory Board, governance, judicial and economic reform programs, Canada is key partner in ensuring a strong, resilient and successful Ukrainian state,” concluded Chyczij. “We are confident that Ukraine’s authorities will substantially intensify the implementation of these essential reforms, working with Canada and other international partners.”