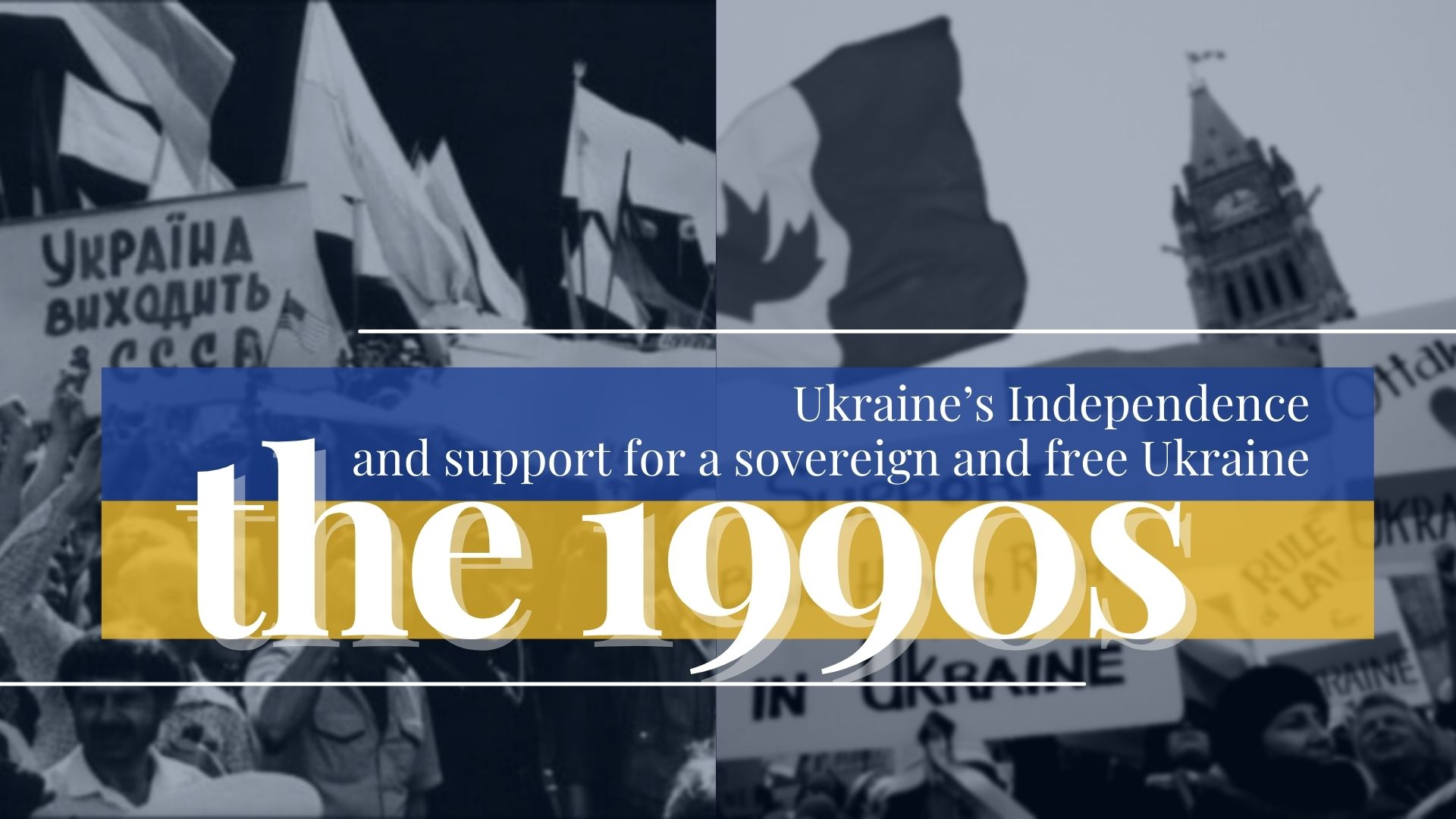 The decade of the 1990s began with significant steps for Ukraine’s Independence, and following the Declaration of Sovereignty in June, 1990 – on August 24, 1991 – Ukraine declared independence, which was confirmed on December 1, 1991 in a referendum where over 90% of Ukrainian citizens voted for independence.

Following Ukraine’s independence, the UCC supported the establishment of a Ukrainian Embassy and Consulate in Ottawa and raised approximately two million dollars for the project.

As Ukraine has gone through many stages of reform and development, UCC has continued to be a leading voice for the Ukrainian Canadian community and advocated for Canada’s continued involvement and leadership in building a democratic, free and prosperous Ukraine.

In 2004, when Ukrainians took to the streets following a falsified presidential election, the UCC supported the Ukrainian peoples’ demand for a free and fair election, and led an international election observation mission during the re-run of the election that followed the Orange Revolution. Canada has played a leading role in observing subsequent national presidential and parliamentary elections in Ukraine.

In late 2013, when Ukrainians again took to the streets during the Euromaidan – the Ukrainian Canadian community again stood strong in support of Ukraine. From coast to coast, Ukrainian communities along with UCC and its branch organizations helped organize services, Auto-Maidan car rallies, and demonstrations in support of the Ukrainian peoples’ right to democracy and in defense of their human rights.

After the triumph of the Revolution of Dignity in February 2014, the UCC advocated strongly to the Canadian government to recognize the new, legitimate authorities in Ukraine, and representatives of the UCC accompanied then-Prime Minister Stephen Harper on his visit to Ukraine. Canada continued to be a world leader in supporting Ukraine and the Ukrainian peoples’ right to self-determination and independence.

Following Russia’s invasion of Crimea and the east Ukrainian oblasts of Donetsk and Luhansk in 2014, for the last 7 years the UCC has worked intensely to coordinate community reaction and response, coordinate community efforts to provide aid and assistance to Ukraine, keep the Government of Canada and Canadian politicians properly informed about events in Ukraine; advise the Government of Canada on providing concrete and tangible responses to the crisis; provide accurate and thoughtful commentary to Canadian media on these events; and provide daily and weekly briefings on developments in Ukraine to politicians, the press and the community.

Throughout the decades, organizations such as the Canada Ukraine Foundation, Help Us Help the Children, Dzherelo, Children of Chornobyl and many other Canadian-founded charities have delivered much-needed support to the Ukrainian people. When Russia again brought war to Ukraine, the community has supported Ukrainian veterans and their families, and those displaced by war.

For the UCC and for Canada’s Ukrainian community, the freedom and independence of Ukraine will forever remain a cause that is top of our minds and nearest our hearts.