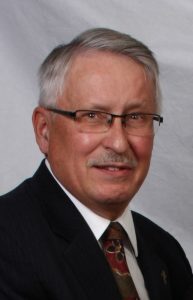 Gerald Luciuk, a Saskatchewan born and educated resident has had an exemplary history of distinguished public service and dedicated community involvement.

A soil scientist by training, Gerald worked with provincial and federal departments of agriculture where he was responsible for pivotal studies on land degradation and soil conservation on the Canadian Prairies. Subsequently, he directed programs for promotion of sustainable agriculture and improved soil and water resource management across the Western Canadian Prairie Region.  In this capacity, his directorates were key participants in programs for conversion of marginal cultivated lands to permanent cover and for promotion of sustainable rural economic development and agricultural diversification.  Later, he was accountable for applied research centres for irrigation studies and crop diversification, agro-forestry development as well the management of PFRA community pasture programs on one million hectares of environmentally sensitive rangelands in Manitoba, Saskatchewan and Alberta.

Gerald extended his Canadian experience to international development in sustainable agriculture beginning with scientific cooperation in Russia. With the collapse of the Former Soviet Union, his agricultural background led to participation in the first Government of Canada technical planning mission to Ukraine charged with establishing sector programs of development assistance to the newly independent Ukraine.   Subsequently, he has been an instrumental leader in numerous strategic policy and technical assistance initiatives in Ukraine including a project as policy mentor in 1993 with the Deputy Minister of Economic Planning in the Ministry of Agrarian Policy of Ukraine.

His work in international development continued with an assignment as director to a China-Canada CIDA funded project on sustainable agriculture and native grassland management in Inner Mongolia.  His involvement in the promotion of sustainable agriculture in Canada and abroad resulted in the publication of a number of scientific papers, presentations and reports on issues of environmentally sustainable land and water management.

Throughout his professional career, Gerald Luciuk has been actively involved in the Ukrainian cultural and religious community.  He is a long time director of the St. Petro Mohyla Institute.  At the local level, Gerald has maintained an active participation in his local Ukrainian Orthodox Parishes in Regina and earlier in Saskatoon.    As a member of the Ukrainian Canadian Congress Regina Council he was instrumental in establishing interim programs for English language learning for new Ukrainian immigrants to Saskatchewan. Currently, he also serves as an Executive Board Member of the Canada Ukraine Foundation as well as on the SUS Foundation of Canada.

At the national religious community level, Gerald served a Board member of the Consistory of the Ukrainian Orthodox Church of Canada from 1999 through to 2010.  As a Consistory member, he chaired an Episcopal Search and Development Committee that was instrumental in securing two new young Bishops for the UOCC in 2008.

Through his Ukrainian student involvement Gerald met and married Cathy Berezniuk, his wife of 40 years.  They have been blessed with a family of four children, Stephania, Lesia, Nadia and Yvan who are all now young professionals and who in turn have blessed Gerald and Cathy with twelve wonderful grandchildren.