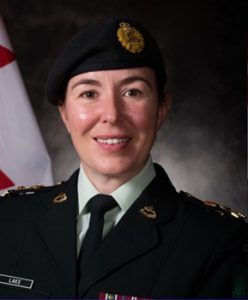 Raised in Churchill Falls, Labrador, LCol Melanie Lake graduated from the Royal Military College of Canada in 2002 with a degree in Chemical Engineering.

She has been immensely privileged to serve in all three Combat Engineer Regiments in Canada. She began her career in 5 RGC as a Field Troop Comd, served as 2IC 23 Armd Sqn and Operations Officer at 1 CER and was Officer Commanding of  24 Fd Sqn and 25 Sp Sqn at 2 CER before returning to her current job as the Commanding Officer of 2 Combat Engineer Regiment in Petawawa, ON. She had the opportunity to learn from some of the best Sappers and Soldiers in the country and considers herself very lucky for these opportunities.

Outside of Combat Engineer Regiments, LCol Lake served as an instructor at the Canadian Forces Leadership and Recruit School, spent time as a HUMINT operator, worked in the Office of the Chief of the Defence Staff as the Senior Staff Officer and oversaw Engineer Operations and Plans at the Canadian Joint Operations Command. She deployed to Afghanistan three times on Op ATHENA and on two domestic operations including as the JTF Comd for Op WINISK. In March 2021, she assumed command of Operation UNIFIER Roto 11. She will return as Commanding Officer of 2 Combat Engineer Regiment following this deployment.

She and her partner Jeff, a Royal Canadian Mounted Police Officer, have a young daughter named Avigail.