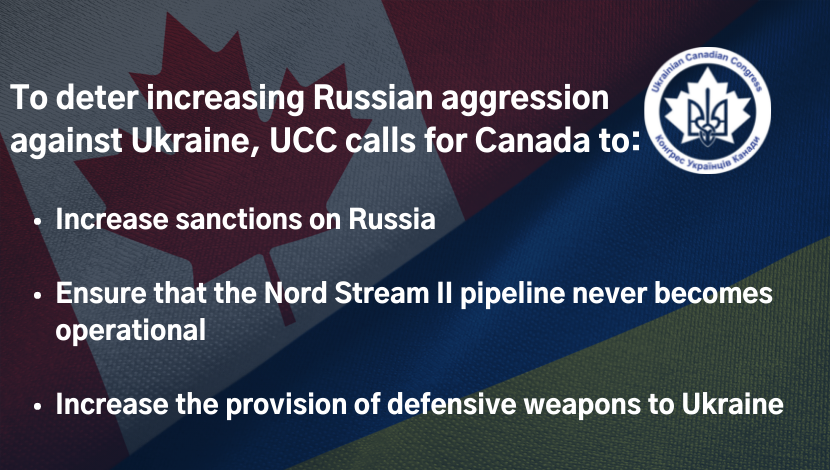 November 17, 2021. OTTAWA, ON. The Ukrainian Canadian Congress (UCC) calls on the Government of Canada and the international community to take decisive steps in response to Russia’s escalation of aggression against Ukraine and increased Russian military movement near Ukraine’s borders.

These military movements have been coupled with mistreatment and victimization of migrants by the Russian client regime in Belarus, and the purposeful destabilization of security at the EU’s border with Belarus.

“For eight years Russia has waged a war of aggression against Ukraine, and is now again signalling a further invasion of sovereign Ukrainian territory,” stated Alexandra Chyczij, National President of the UCC. “The Russian regime has shown time and again that it responds only to strength. We call on Canada and international partners to take concrete steps to deter further Russian aggression.”

The UCC calls on Canada and allies to:

On November 15, NATO Secretary General Jens Stoltenberg stated, “In recent weeks, we have seen large and unusual concentrations of Russian forces close to Ukraine’s borders,” and the Foreign Ministers of Germany and France stated,   “Against the backdrop of renewed concerns about Russian movements of troops and hardware near Ukraine, we call on Russia to adopt a posture of restraint and provide transparent information about its military activities.”