January 24, 2022. OTTAWA The Ukrainian Canadian Congress (UCC) thanks everyone from coast to coast to coast who joined the #StandWithUkraine campaign on January 22.

A survey conducted by Abacus Data on January 20-21 shows that Canadians overwhelmingly and strongly support their Government providing assistance to the Ukrainian people, who are defending their country from Russian aggression.

The UCC urges the Government of Canada to hear the voice of the Canadian people and substantially increase military assistance to Ukraine, including the provision of weapons to Ukraine’s Armed Forces.

“The values we hold dear as Canadians – freedom, democracy, and respect for human rights – are the values that the Ukrainian people are bravely defending today,” stated Alexandra Chyczij, National President of the UCC. “Canadians stand with the Ukrainian people. We urge our government to substantially increase support for Ukraine’s defence against increasing Russian aggression.” 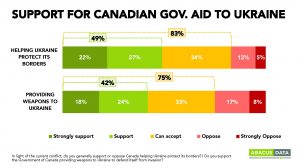 A Memo on the Survey is available here: