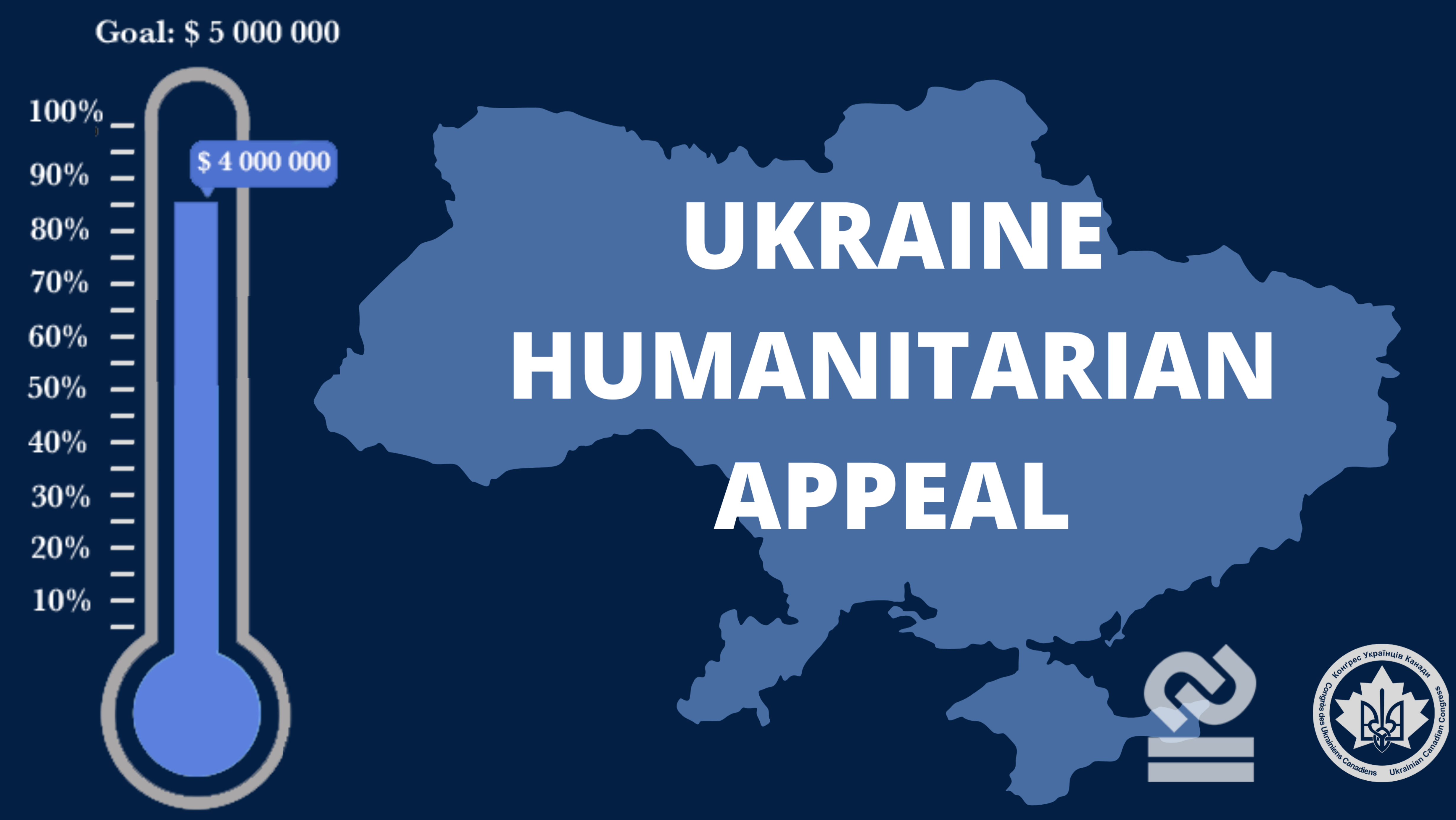 February 28, 2022. TORONTO/OTTAWA – Last week, Russia declared war on Ukraine. The Russian army has attacked military facilities, infrastructure and civilian targets. The WHO health cluster estimates that the number of affected people has climbed from 2.9 million a week ago, to over 18 million today.

The Ukraine Humanitarian Appeal, established by the Ukrainian Canadian Congress (UCC) and the Canada-Ukraine Foundation (CUF) is working with Ukrainian government ministries, who are in the best position to advise on the needs on the ground so that we can ensure that the donations we receive meet the needs of the Ukrainian people.

The UCC-CUF Ukraine Humanitarian Appeal has already deployed approximately $500,000 CAD to provide food packages, medicine and shelter. Subsequent tranches of support will follow as we monitor delivery and needs

“As of 9:00 am EST on February 28, the Appeal has raised over $4 million from a broad base of supporters across Canada – provincial governments, family foundations, community organizations, credit unions, public and private companies, and thousands of individual donors,” said Orest Sklierenko, President and CEO of CUF. “I am overwhelmed by the outpouring of support from every corner of Canada, who share the horror of the war being waged by Russia against the Ukrainian people.”

“We are extremely grateful to all Canadians for their continued generosity and support at this time of need,” said Alexandra Chyczij, President of the Ukrainian Canadian Congress. “Putin must be held to account in the International Criminal Court of Justice where he should be tried for war crimes.”

Please donate to the appeal today to support millions of Ukrainian families who have been displaced from their homes. #HelpUkraineNow

Your donation is needed to help support this important community project!

Donations in support of humanitarian relief can be made through:

Background
The Ukraine Humanitarian Relief Committee has been established jointly by the Ukrainian Canadian Congress and the Canada Ukraine Foundation to formalize a coordinated approach in providing humanitarian assistance quickly and efficiently to those in need in Ukraine to address any further aggression by Russia. The main efforts of cooperation are to provide humanitarian assistance/relief in the areas of Assistance to displaced persons, Medical care, Emergency Shelter and Food security.

As of Sunday, February 27, the Ukraine Humanitarian Appeal has raised over $3 million with widespread support from all parts of Canada, from friends of Ukraine from all sectors, including:
• The provinces of Alberta ($1,000,000), Saskatchewan ($100,000), Manitoba ($150,000), Ontario ($300,000) and Nova Scotia ($100,000)
• Family foundations and major donors led by the Temerty Family Foundation ($750,000)
• Major Credit Unions across Canada, led by Ukrainian Credit Union ($100,000) and many other members of the Canadian Credit Union Association
• Canadian businesses led by Chapman’s Ice Cream ($50,000) and many others
• And thousands of Canadians from coast to coast