Sign these petitions to #CloseTheSky over Ukraine!11 March 2022Next 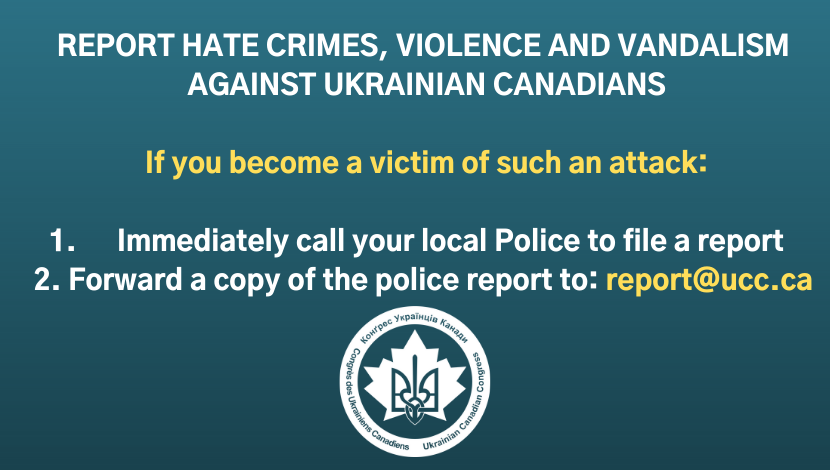 Following the Oilers game, where the 50/50 draw was dedicated to supporting the Ukrainian Canadian community’s humanitarian relief efforts, a group of our community members were taking photos outside the arena. They were adorned with Ukrainian flags and other Ukrainian symbols.

The Ukrainian community members were assaulted by a group of men, who spoke and yelled in Russian, who began to assault them, throwing punches, kicks and grabbing by the neck.

“This was an attack on a group of people simply posing for a photo. Russia is waging a genocidal war against Ukraine. We were showing our support for Ukraine and we were assaulted because of it,” stated Orysia Boychuk, President of UCC-APC, who was part of the group that was assaulted. “We will never be intimidated by cowards who turn to violence to try to silence us.”

The Rogers Centre has informed us that the assault was recorded on video cameras. Police officers on scene handcuffed one of the assailants, who was taken by police from the scene.

“We have seen increasing violence, vandalism and attacks on members of our Ukrainian Canadian community, our institutions and buildings. Given that this group of Ukrainians were clearly identified as such by the flags and other symbols they wore, we insist that Edmonton police investigate this assault as a hate crime,” stated Alexandra Chyczij, National President of the UCC. “Should any members of our community suffer any attacks, please contact local law enforcement immediately. We ask that you also contact the UCC National Office to inform us of any incidents.”

As Russia wages a genocidal war against Ukraine and the Ukrainian people, the Ukrainian Canadian Congress (UCC) has been notified of incidents of violence and vandalism targeting members of our community in Canada. These attacks on our community are motivated by hate and must be reported to and investigated by law enforcement agencies.

If you become a victim of such an attack, we urge you to:

We will not be intimidated by cowards who hate Canada, Ukraine, our freedoms and our way of life.

Help us protect our community!