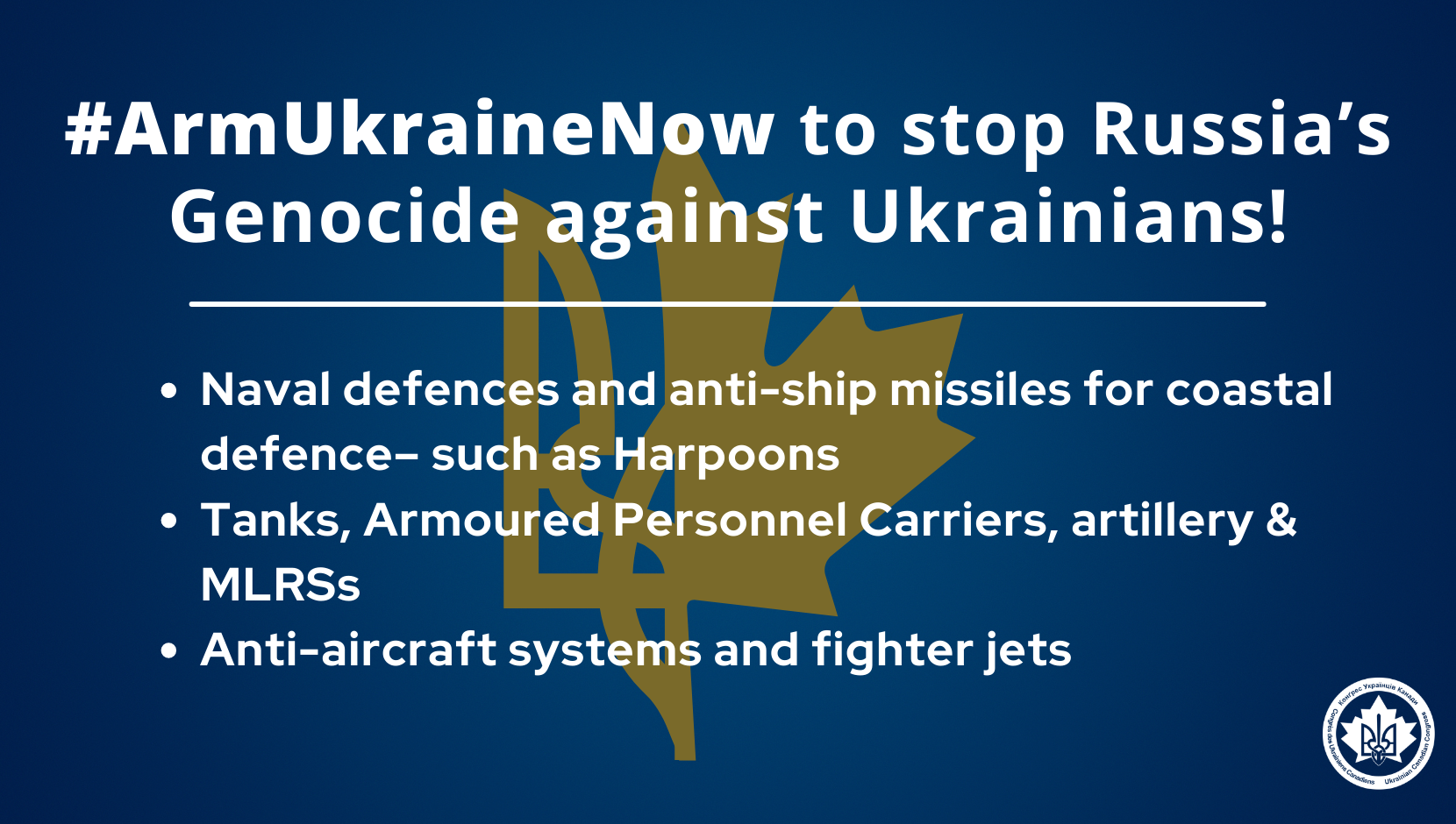 April 14, 2022. OTTAWA, ON. The Ukrainian Canadian Congress (UCC) calls on Canada and our allies to provide Ukraine with all the weapons and materiel necessary to defeat the invading Russian armies and protect the freedom of Europe from Russian tyranny.

As US President Joe Biden stated on April 12, “I called it genocide. It has become clearer and clearer that Putin is just trying to wipe out the idea of even being able to be Ukrainian.” Prime Minister Trudeau stated on April 13, “I think it’s absolutely right that more and more people be talking and using the word ‘genocide’ in terms of what Russia is doing.”

The war crimes and crimes against humanity that Russia is committing leave no doubt that Russia seeks the destruction of the Ukrainian state and the annihilation of the Ukrainian people.Today, UCC National President Alexandra Chyczij wrote to Minister of National Defence Anita Anand, expressing the community’s gratitude to the Canadian government for the inclusion in last week’s Federal Budget of $500 million in military aid to Ukraine.

“However, the UCC fears that the deployment of this aid will take time as the Budget makes its way through the legislative process. This is time that the Ukrainian people do not have,” stated Chyczij in her letter to Minister Anand. “The UCC and the Ukrainian Canadian community urge you to deliver military aid to Ukraine as quickly as possible. We ask that Canada immediately provides the Ukrainian Armed Forces with the weapons and equipment they need to liberate Ukrainian lands still under Russian occupation.”

Russia, a terrorist, criminal state, must be fully isolated from the international community. The UCC will continue to work to ensure a full trade embargo on Russia and the listing of Russia as a state supporter of terrorism. The UCC is also calling for the expulsion of all Russian diplomats from Canada.

“Apologists for and advocates of the destruction of a nation have no place in Canada,” stated Ihor Michalchyshyn, UCC CEO. “We have repeatedly called on the Government of Canada to expel all Russian diplomats from Canada. We await our government’s swift action to protect Canadians from the pernicious influence of Russian espionage and disinformation.”

To view Ukrainian President Volodymyr Zelenskyy’s call to the international community to #ArmUkraineNow, please click below: