April 27, 2022. OTTAWA, ON. The Ukrainian Canadian Congress (UCC) welcomes the unanimous recognition by Canada’s House of Commons that the “Russian Federation is committing acts of genocide against the Ukrainian people.”

The motion, introduced by Heather McPherson (MP, Edmonton-Strathcona) was adopted by the House of Commons unanimously.

“In unanimously recognizing that Russia is committing genocide against the Ukrainian people, our House of Commons has taken an important step in ensuring that the perpetrators will be brought to justice. The unanimous adoption of this motion by our Members of Parliament demonstrates that the Canadian people stand with the people of Ukraine,” stated Alexandra Chyczij, National President of the UCC. “We are grateful to Member of Parliament Heather McPherson for introducing this motion, and to all MPs for supporting it. The UCC will continue to work with the Parliament, the Government and all parties to ensure that the Ukrainian people have the tools they need to prevail in this unjust war and that the Russian officials responsible for genocide face retribution and punishment for their crimes.”

The motion adopted by the House states: 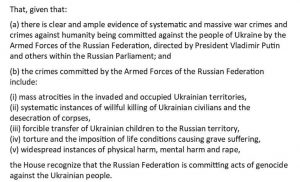