The Ukrainian Canadian Congress (UCC) issued the following statement in response to a June 12 Globe and Mail article, Canadian representative attends Russian embassy party in Ottawa which reported the attendance of an official from the Department of Global Affairs Canada at celebrations held at the Russian Embassy in Ottawa:

That the Department of Global Affairs would see fit to attend celebrations organized by the genocidal Russian government, while Ukraine pleads for more arms to defend itself from an unprovoked invasion, is deeply offensive to Ukrainian Canadians and an insult to the memory of the brave Ukrainian people, soldiers and civilians, who have been barbarically slaughtered by Russia’s armed forces in an unprovoked invasion of their country.

The Russian government is committing genocide against the Ukrainian people. One does not break bread with war criminals.

The only meaningful response the Government of Canada can provide is to expel the Russian diplomatic mission from Canada.  The UCC has long advocated for the expulsion of Russian diplomats, who represent a criminal, terrorist regime. Furthermore, Russia must be listed as a state supporter of terrorism. These calls have gone unheeded and unanswered. The failure of our government to adequately respond to the threat Russia and its representatives in Canada pose has deleterious effects on the security of all Canadians. We call on the Government of Canada to take these steps immediately.

The war wrought by Russia is now in the second, more deadly phase.  Over 100 Ukrainian soldiers die each day while they wait for delivery of weapons promised by allies.  Ukraine is in desperate need of armoured vehicles, howitzers, multiple rocket launchers, ammunition, tanks, drones and other materiel. The UCC again calls on Canada and allies to deliver these weapons into the hands of brave Ukrainian soldiers immediately.

According to the Kiel Institute for the World Economy and other international experts, Canada’s military aid and assistance to Ukraine, proportionate to GDP, is far below that provided by the United States, the Baltic states, and other allies. As the Ukrainian people continue their courageous defence of liberty in Europe, the UCC calls on the Government of Canada to substantially increase military aid to Ukraine and the Ukrainian people.  Canada can and should do more. 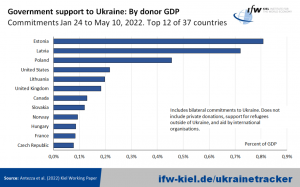