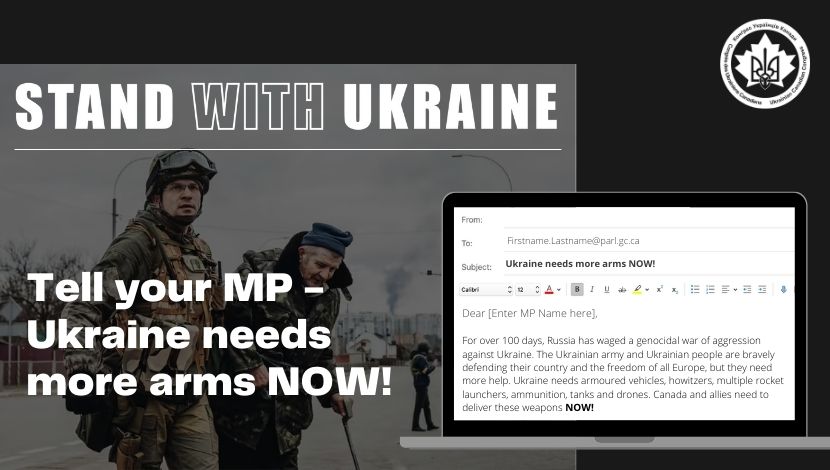 June 14, 2022. OTTAWA, ON. For 111 days, the Ukrainian Armed Forces and the Ukrainian people have courageously defended their country and all of Europe from Russia’s genocidal war of aggression.

But Ukraine fights against a far larger, barbaric, and genocidal Russian enemy, that purposely targets civilians and civilian infrastructure, raining death and destruction on Ukrainian cities and towns. Ukraine needs more weapons and military aid to stave off this brutal attack.

Ukrainians ask nobody to fight for them. The Ukrainian people ask only that we provide the weapons and materiel necessary to enable them to drive the enemy from their sovereign land.  Russian imperialist designs must be stopped and Canada and our allies need to do their part.

Canada can and should do more to support Ukraine. According to the Kiel Institute for the World Economy and other international experts, Canada’s military aid and assistance to Ukraine, proportionate to GDP, is far below that provided by the United States, the Baltic states, and other allies.

Write to Your MP! Canada needs to do more to help Ukraine!

Send your Member of Parliament an email or letter calling for Canada to accelerate delivery of heavy weapons to Ukraine.

Dear [NAME OF YOUR MP]

Dear Minister [if your MP is a Minister]

For over 110 days, Russia has waged a genocidal war of aggression against Ukraine. The Ukrainian army and Ukrainian people are bravely defending their country and the freedom of all Europe, but they need more help. Ukraine is losing 100 soldiers a day and needs weapons now.

As your constituent, I ask that you call for a substantial increase in Canadian and Allied military aid to Ukraine and the immediate delivery of more weapons to Ukrainian soldiers.

You can download a template letter here: UCC June 14 Template Letter to MPs