Earlier today, Russia launched a rocket attack on a shopping mall in Kremenchuk, Poltava oblast. According to President Zelenskyy, over 1000 civilians were in the mall at the time of the attack. The number of civilians murdered and injured in this barbarous Russian attack is unknown at this time

A shopping mall has no military or strategic value. This heinous, cowardly attack is another attempt by Russia to murder innocent civilians and sow terror in Ukraine. These purposeful Russian attacks on Ukrainian civilians take place daily. Thousands of Ukrainian civilians have been murdered. Russia is committing genocide against the Ukrainian people.

Russia will not stop these attacks against innocent people unless stopped with force. After more than 120 days of Russia’s war, Canada and our allies still refuse to provide Ukraine with all the anti-air, anti-missile, naval defence, and artillery systems needed to drive the Russian occupier from Ukrainian land and end this war.

The Ukrainian people are defending all of Europe from Russia’s brutality.  If our leaders truly mean what they say – that, as Prime Minister Trudeau has said – “You are not alone. We are standing with you” – then our leaders will provide Ukraine with the weapons and materiel needed for Ukraine to win this war.

The longer Canada and our allies wait to provide all necessary weapons to Ukraine, the more civilians Russia will murder.

The UCC calls on Canada and allies to:

Join the UCC Call to Action! Write to your MP and tell them Ukraine needs more weapons NOW! To find out how you can help please click on the image below: 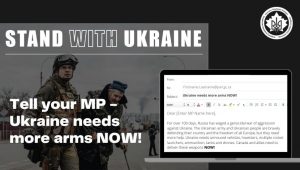