Designating the Russian Federation a state supporter of terrorism

Ukraine Humanitarian Appeal purchased and arranged shipment of 140 metric tons of buckwheat seeds to Ukraine amidst the looming food crisis caused by Russian invasion.08 August 2022Next 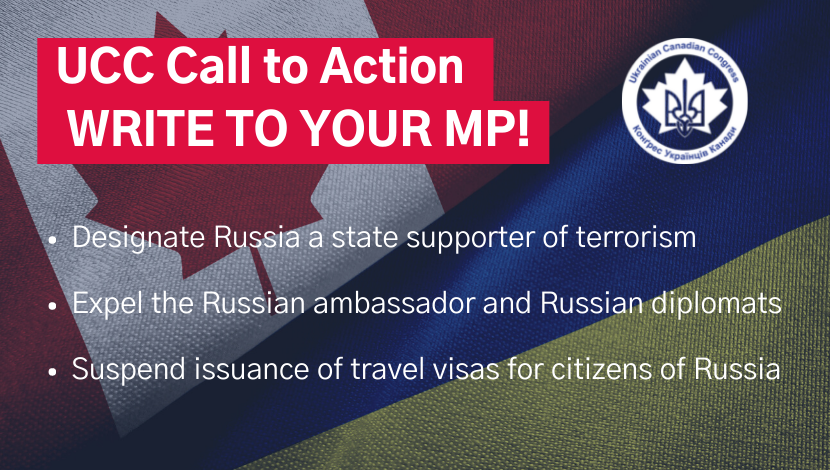 “Russia is a terrorist state waging a genocidal war on Ukraine. Russia threatens the world with nuclear disaster – shelling the largest nuclear power plant in Europe near Zaporizhzhia,” stated Alexandra Chyczij, National President of the UCC.

“In its war against Ukraine, Russia is committing war crimes and crimes against humanity on a scale not seen in Europe since WWII. Russia is a criminal, terrorist state that must be isolated completely from the international community and Canada’s government should follow the example of our European allies.”

The UCC wrote to Prime Minister Justin Trudeau in May 2022, urging the Government to designate the Russian Federation as a state supporter of terrorism.

On August 11, the Saeima, Latvia’s Parliament, declared the Russian Federation a state sponsor of terror and called on like-minded countries to take the same view.

At the end of July, the US Senate adopted a unanimous resolution calling on the Secretary of State to designate the Russian Federation a state supporter of terrorism. American legislators have made clear that should the Executive branch fail to act, Congress will designate Russia a terrorist state through legislation.

Russia’s threat to Canada’s national security has only increased since February 24, 2022, and the UCC calls upon the Government of Canada to take steps to mitigate that risk.

The UCC calls on our Government to act to expel Russian diplomats from Canada.

Since February 24, over 25 EU and NATO member states have expelled Russian diplomatic staff from their countries. Poland, Germany, and France have expelled over 40 personnel each. The security and espionage threat posed to Canada by the presence of Russian diplomats in Canada is well known. This threat increases as Russia’s aggression against the Free World and Russia’s contempt for democratic values increase.

Canada should also accede to the Ukrainian government’s request that Western countries prohibit the entry of citizens into the Russian Federation.

On August 8, President Zelenskyy told the Washington Post that “the most important sanctions are to close the borders — because the Russians are taking away someone else’s land.”

Several states of the European Union –Estonia, Latvia, Lithuania Finland, the Czech Republic, Slovakia, and Poland – have suspended, restricted, limited, or otherwise tightened the issuance of travel visas to citizens of the Russian Federation and are seeking to implement Schengen-wide measures.

Estonia, for example, will no longer issue temporary residence permits or study visas to Russians. The Foreign Minister of Estonia, Urmas Reinsalu, stated recently, “We cannot act as if there is no genocidal war in some areas of life. They are citizens of a country fighting a genocidal war. In this situation, Estonia plans to also encourage the European Union to impose such restrictions. The sanctions should affect the whole of Russian society.”

Send your Member of Parliament an email or call their constituency office and urge Canada to designate the Russian Federation a state supporter of terrorism!

For over 170 days, Russia has waged a genocidal war of aggression against Ukraine. The Ukrainian army and Ukrainian people are bravely defending their country and the freedom of all Europe. Russia is a criminal, terrorist that must be isolated from the international community. The Government of Canada must effectively counter the increased threat to our security by the Russian Federation. As your constituent, I ask that you:

– Introduce a resolution in the House of Commons calling on the Government of Canada to designate the Russian Federation a state supporter of terrorism;

– Support the expulsion from Canada of the Ambassador of the Russian Federation and the Russian diplomatic mission;

– Support the suspension of issuing of travel visas by Canada to citizens of the Russian Federation.