Commemorating the Victims of Babyn Yar 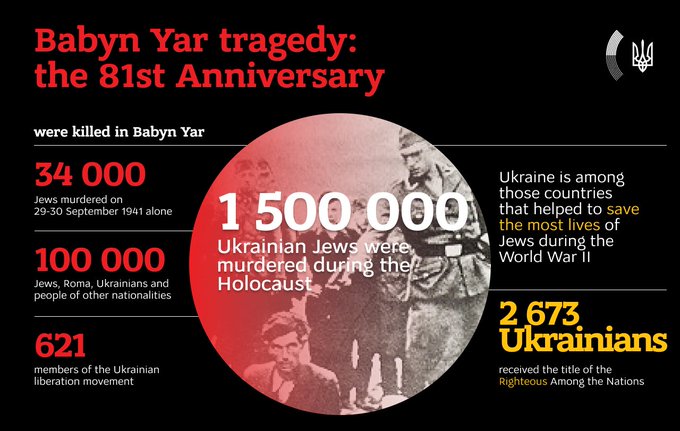 September 29, 2022. OTTAWA, ON. On September 29 and 30, the world commemorates the anniversary of the Babyn Yar Massacre.

On September 29 and September 30, 1941, the Nazi German occupiers of Kyiv rounded up 34,000 Jewish men, women and children and murdered them at Babyn Yar, a ravine outside of the city.

Later, at Babyn Yar, the Nazi German occupiers murdered Ukrainians, Roma, POWs, opponents of the occupying regime, and persons with disabilities. They joined their Jewish neighbours in the mass graves at Babyn Yar.  The total number of innocent victims is estimated at 100,000 people.

Today, Russia wages a genocidal war of aggression against Ukraine, seeking to destroy Ukraine and the Ukrainian people. Russia is committing war crimes, crimes against humanity, and inhuman atrocities on scale not seen in Europe since WWII. In March 2022, Russia bombed the vicinity of the Babyn Yar Memorial site near Kyiv, murdering at least five people.

The past has taught us that aggression and hatred must be forcefully opposed. As we remember and honour the innocent victims of Babyn Yar we renew our resolve to speak out against evil in all its manifestations.

On this 81st anniversary of Babyn Yar, we pray for the thousands of innocent people who were murdered there, and the millions who were murdered in the Shoah. We draw inspiration from the courage of Survivors, and from the Righteous who risked their lives to help their neighbours.

May Their Souls Be Bound in the Bonds of Eternal Life. Вічная Пам’ять. 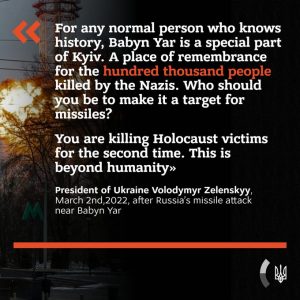