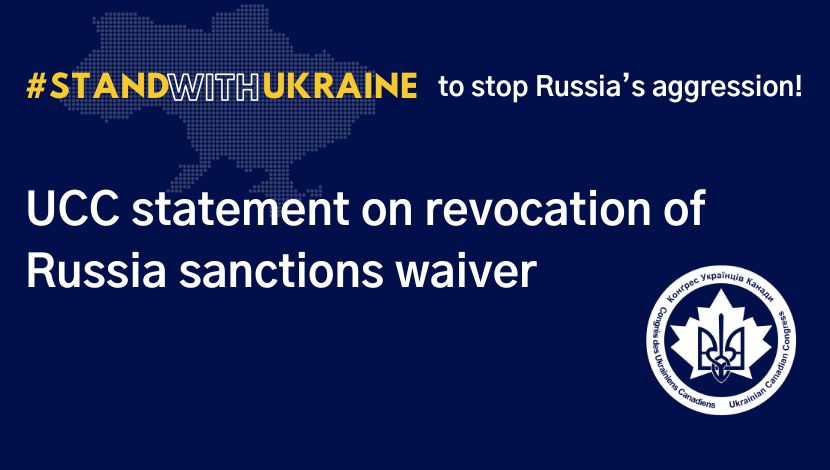 Alexandra Chyczij, National President of the Ukrainian Canadian Congress (UCC) issued the following statement in response to the announcement by the Government of Canada that the sanctions waiver granted for turbines for the Nord Stream 1 Gazprom pipeline has been revoked:

The Ukrainian Canadian Congress is grateful to the many members of the Ukrainian Canadian community and the Canadian public at large who expressed their concerns about and opposition to the granting of a sanctions waiver that allowed for the return from Canada to Gazprom of Siemens turbines for the Nord Stream 1 pipeline.

Yesterday the Government of Canada heard these concerns and revoked the sanctions waiver on the turbines, for which we applaud the Government. We are grateful as well to members of the House of Commons Standing Committee on Foreign Affairs and International Development, who held hearings on this sanctions waiver.

As the UCC stated in July when Canada granted this waiver, the Government of Canada’s capitulation to Russian demands would do nothing to assist European energy security and would only embolden Russia to further demands. Subsequent events have confirmed the accuracy of this position. The appeasement of aggressors has always led, inevitably and predictably, to more aggression.

As the Ukrainian people face increasingly vicious Russian terrorist attacks and bombardments of their cities, the UCC calls on the Government of Canada to increase the supply of military and economic assistance to Ukraine and strengthen sanctions against Russia.

In August, President Chyczij testified at the House of Commons Standing Committee on Foreign Affairs and International Development on the issue of the Gazprom sanctions waiver. That testimony can be viewed here:

The brief the UCC submitted to the Committee is available here