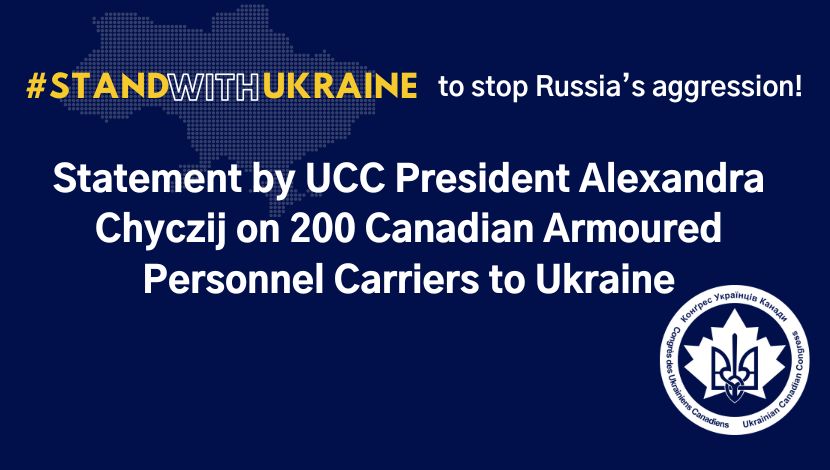 Alexandra Chyczij, National President of the Ukrainian Canadian Congress, issued the following statement in response to the announcement by the Honourable Anita Anand, Canada’s Minister of National Defence, that Canada will provide 200 armoured personnel carriers to Ukraine’s Armed Forces:

The Ukrainian Canadian Congress is grateful to the Government of Canada for the steadfast support delivered to Ukraine and the Ukrainian people, who are courageously defending their country from Russia’s genocidal war of aggression.

In particular, we welcome the recent announcements that Canada will provide 200 Armoured Personnel Carriers, and a NASAMS air defence system to the Ukrainian Armed Forces – which will assist Ukraine in defending its cities and skies from brutal Russian attack and bombardment.

Russia has demonstrated time and again its intention to destroy Ukraine as an independent state. The wanton destruction and systematic atrocities committed against Ukrainian civilians by Russia’s invading armies are confirmation of the necessity to defeat Russia. Russia will not leave Ukraine; their armies must be driven out. The sooner Russia is driven from Ukraine, the more lives will be saved.

As Russia’s full-scale war against Ukraine enters a second year, the continued, sustainable and timely support for the Ukrainian Armed Forces delivered by Canada, our NATO allies, G7 and other partner countries is playing a significant role is ensuring Ukraine’s victory and the defence of democracy in Europe.