Virtual celebration of the Independence Day of Ukraine, featuring shows on Forum TV and Kontakt TV. Schedule below: 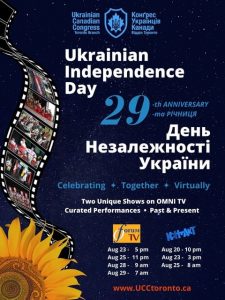 The community celebrated the 29th anniversary of Ukraine’s Independence outside of Sts. Cyril and Methodius Ukrainian Church. Everyone wore masks and physically distanced. Irena Newton, president of UCC Niagara spoke about Ukraine’s state today and not to stop supporting our Ukrainian army on the Eastern front fighting to protect our borders from Russia.
Mayor Sendzik spoke about the importance of democracy and truth, and the need to fight for what we believe.
Tanya Choly spoke about Canada as an example of a wonderful and free country in which to live, and also to remember that Belarus is now fighting for their truth and freedom from corrupt governance, as we did 6 years ago, and that we should support Belarus people in their time of need.