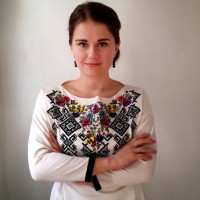 Darya was born and raised in Ukraine and moved to Canada 8 years ago to study Neuroscience at McGill University. She has played an active role in the Ukrainian Canadian community ever since.

Darya has been an executive member of the McGill Ukrainian Students’ Association for 6 years. As president, she organized demonstrations, conferences, and awareness campaigns during the 2013-2014 Revolution of Dignity, and has given numerous TV and radio interviews. As Vice-President of Culture, she created Ukrainian Language Awareness week on campus, organizing language learning sessions, movie screenings, and a poetry reading night.

Darya has also served on the Executive Board of SUSK (Ukrainian Canadian Student Union) and has led the organization of the 2015 SUSK Congress in Montreal.

In 2015 and 2016 Darya worked as a biology teacher at a Saturday Ukrainian school in Montreal, where she designed and delivered a biology curriculum in Ukrainian for high school students.

Over the past two years, Darya has served as secretary for the Montreal Branch of the Ukrainian National Federation. She enjoys making a difference in her community through support of local initiatives.

Darya is now in her second year of medical school at McGill University. She is combining her dedication to Ukraine with her passion for medicine by participating in a global health project in Ukraine. She is working with physicians in Kyiv to set up a trauma registry, which analyse the causes and outcomes of trauma at Ukrainian hospitals. The goal of the project is to design prevention methods and improve trauma interventions at the local level.