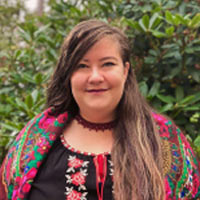 her Baba, Joan Sereda, for instilling in her a passion for Ukrainian culture. In her academic life, Devon is an MA Candidate in Applied Theatre and Slavic Studies at the University of Victoria. Her research is entitled “Пам’ять/Pam’yat (Memory): Theatre as a Vehicle for Healing Intergenerational Trauma within the Ukrainian Canadian Experience”. Over the past four years, she has been developing a play about Ukrainian Canadian immigration and oppression, which has been staged twice and will be remounted as part of her thesis project. Her intention is to encourage intergenerational conversation and healing within the Ukrainian Canadian community. This January, she will be touring the play in British Columbia and hopes to tour the show to Ukrainian communities across Canada in the future.

This September, Devon was invited to present her research at the Second International Conference on Canadian Studies “Canada-Ukraine: Past, Present, Future” in Chernivtsi, Ukraine. In addition, she spent her summer semester in Ukraine conducting research and participating in the Summer Institute at the National University of Kyiv Myhola Academy.