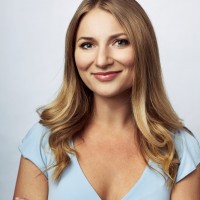 Lianna Makuch is a second generation Ukrainian Canadian theatre artist. She is a graduate of the BFA Acting Program at the University of Alberta and is a co-Artistic Producer with Pyretic Productions. Lianna is the playwright and principal performer of Blood of Our Soil, a new Ukrainian Canadian play inspired by the experiences of the Lianna’s grandparents who fled Ukraine during WWII, and true stories from the country’s current conflict. To develop the play, Lianna and Pyretic Productions’ key creatives travelled to Ukraine in October 2017 on a self-funded research trip. There they interviewed close to 50 people living in the heart of the conflict zone in Eastern Ukraine.

Blood of Our Soil premiered in Edmonton (2018) and Toronto (2019) to sold-out audiences and critical acclaim, and will soon be embarking on a national tour. The production has been recognized with several artistic and community awards including the ACUA-URDC Award (2018) and a Hetman Award from UCC-Alberta Provincial Council (2019). Lianna was recognized as a Top 30 Under 30 Artist by the Alberta Council for Ukrainian Arts, and the play was nominated for four Elizabeth Sterling Haynes Awards including Outstanding New Play and Outstanding Production.

Lianna is also a founding member of Canadians in Support of Ukrainian Political Prisoners (CSUPP), and was an integral part of creating and circulating a petition calling upon the House of Commons to demand the release of Ukrainian political prisoners. The petition was tabled in parliament by Linda Duncan on 9 November 2018 and received a supportive response from the Minister of Foreign Affairs, Chrystia Freeland, on the 31 January 2019. Lianna was also a key leader in fundraising for the Ukraine-based NGO “Our Children,” a group which fundraises for families of political prisoners in Crimea.