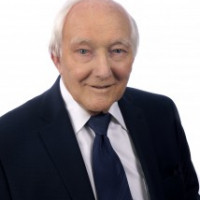 Nestor was born in Hamilton, Ontario on November 26, 1930. He grew up in an environment that was centred around the church; he sang in the church choir and was an active member of C.Y.M.K. along with his 5 brothers and sisters. His father was a cantor, and served many years on parish council.
When the family moved to Toronto, in 1938, they became members of St. Volodymyr Ukrainian Orthodox Cathedral. Nestor, at age 15, began singing in the church choir and conducted the C.Y.M.K choir.
As a teenager, he attended Harbord Collegiate where he played in the bugle band. Upon completion of high school, Nestor first attended The University of Toronto, where he received a degree in the Arts, and then at the Ontario College of Education for his Teaching Qualifications in Music, Mathematics and Science. During his studies there, he conducted the Ukrainian Club Students Choir for 2 years and performed Gilbert and Sullivan at OCE.
Upon graduation, in the 1950s and 1960s, he taught instrumental music, vocal and mathematics in Port Colbourne, North Bay, Hamilton and King City. During this time, he was very active in the Ukrainian communities. Nestor began conducting church choirs in 1952 at St. Andrew’s and went on to conduct in Welland ‘55-’57, Hamilton ‘59-‘61, Oshawa ’61-’63 and in Toronto parishes – St. Demetrius ‘63-‘73, St. Andrew’s ‘81-‘88 and St. Volodymyr’s Cathedral ’74-’79 and ’88-’03.
During the five decades from 1960 to 2006, Nestor brought together, literally, hundreds of people to sing in various vocal ensembles including: 50th Anniversary (Ilarion) Youth Choir (a 150 voice youth choir and folk ensemble); The Ukrainian Orthodox Liturgical Singers; The Millennium 654 voice choir consisting of singers from across Canada culminating in a Liturgy and concert at Vic Copps Arena in Hamilton; The St. Andrew’s Mini Millennium 40 voice choir performing throughout British Columbia; Annual Eastern Eparchy Celebrations joint choirs in liturgies and concerts at the St. Volodymyr Cultural Centre in Oakville; taught vocal and orchestra at Camp Kiev in Oakville; taught four church cantor’s courses; taught aspiring conductors the art of Orthodox liturgical singing techniques and conducting.
While working with the different choirs that he formed and conducted and recorded, Nestor found the time to: write 2 liturgies, psalms, chants, kondaks, many folk songs, in particular, from Shevchenko’s poem “Село” a vocal and orchestral composition entitled “ Чернобольська Мати” to name but a few.
In closing, Nestor Olynyk has worked with hundreds, if not thousands, of singers in both Church choirs and folk choirs throughout Eastern Canada and parts of Western Canada for over six decades. He has touched the hearts of many Ukrainian Canadians and others through his infectious enthusiasm and inspirational leadership, vision and love of singing for which many people are grateful. He has passed on his legacy to others to carry the torch of the beauty and great traditions of singing both Ukrainian Orthodox Liturgical a cappella singing and folk music.