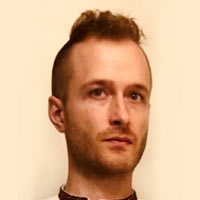 aul Kodak was born in Saskatoon on May 8, 1989 to Sonia (Kaminsky) and Ihor Kodak. He is one of four children who was raised in a vibrant Ukrainian Orthodox family, participating in church, community, and family cultural activities from his earliest days. His parents’ backgrounds inspired him to enthusiastically embrace his faith and culture. Ihor, a gifted musician, performed in the popular Ukrainian band “Mria” for many years, and Sonia, a talented singer and dancer, performed and became and instructor, inspiring countless students to pursue Ukrainian dance.

Paul attended the Ukrainian Bilingual program in St. Maria Goretti and Holy Family Elementary Schools. He graduated and received an honours diploma from Bishop James Mahony High School in 2007 and achieved excellent academic standing with honours in the Study of Heritage Language at St. Petro Mohyla Institute. Paul started Ukrainian dance at the age of four, dancing with Sonia’s School of Ukrainian Dance and Vesnianka Academy of Ukrainian Dance from 1994 – 2007. He attended summer dance camps and workshops, competed in countless festivals, and won many awards and scholarships. From 2007-2004, Paul danced with Yevshan Ukrainian Folk Ballet Ensemble, performing in North America and touring Ukraine in 2009. In 2010, he began instructing in Boyan Ukrainian Dance Association. He helped start “Boyan on Tour”, an extension of Boyan’s senior dancers, directing performances “Fantazia” (2013) and “Podorozh” (2015) that included tours to eastern USA and Costa Rica, and a welcome home show “Korinnya” (2018) after a tour to central and western Ukraine. A special thank you to these artistic directors; Vitali Sorokotiaguine, Zhenia Bahri, and Serhij Koroliuk, who have left such a deep impact on him wanting to become a Ukrainian dance instructor. He performed with the Lastiwka Ukrainian Orthodox Youth Choir, attended Green Grove Ukrainian Orthodox Youth Camp, transitioning from participant to counsellor and then camp director in 2008. He has held positions on the National CYMK executive, been Youth Ambassador for the Ukrainian Karpaty Pavillion at Folkfest, and since 2005 has sung and played in the Ukrainian dance band, “Half Na Piv”.

Paul enjoys spending time with friends and family, and being a part of his community, volunteering in numerous Ukrainian social and cultural events. Paul is incredibly determined and a motivation to young and old. He has overcome life-changing health issues with perseverance and great strength of character and continues to participate in and encourage young people to embrace and celebrate our Ukrainian culture and heritage.