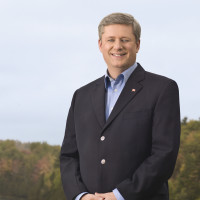 Winnipeg, Manitoba-March 2, 2011-The Ukrainian Canadian Congress is pleased to announce that Prime Minister Stephen Harper will be awarded the Shevchenko Medal in Toronto on March 25, 2011.

The Shevchenko Medal is the highest form of recognition that can be granted by the Ukrainian Canadian Congress. It recognizes individuals for their outstanding national contribution towards the development of the Ukrainian Canadian community.
Prime Minister Harper and his government have made many contributions to the Ukrainian Canadian community, both at home and abroad, including the passage of An Act to establish a Ukrainian Famine and Genocide (“Holodomor”) Memorial Day, making Canada one of the first countries to adopt legislation to recognize the Holodomor of1932-33 as an act of genocide. The establishment by Prime Minister Harper of the “Canadian First World War Internment Recognition Fund” in 2008 was the culmination of many years of effort by our community to recognize the unjust internment of Ukrainian Canadians and others from 1914 – 1920.
Prime Minister Harper has been an active proponent of democratic reforms in Ukraine as evidenced by his recent trip to Ukraine in October 2010 where he publicly expressed Canada’s commitment to human rights, democratic development, and free and fair elections in Ukraine.
This was preceded by Canada sending 200 election observers to Ukraine for the 2010 Presidential elections. One of the highlights of the Prime Minister’s trip to Ukraine was the signing of a Youth Mobility Agreement to facilitate travel and exchanges between Canadian and Ukrainian youth. Prime Minister Harper has also been an active proponent of Ukraine’s accession into NATO and in 2009 his government entered into Free Trade negotiations with Ukraine and renewed Ukraine’s status as a country of priority for international assistance through CIDA.
The first Prime Minister to receive the Shevchenko Medal was the Rt. Hon. John Diefenbaker, who was recognized for his outstanding contributions to the cause of Ukraine and other nations in their struggle for human dignity and liberty.
The Ukrainian Canadian Congress will present the Shevchenko Medal to Prime Minister Harper on Friday, March 25, 2011 at a tribute event to be held at the Liberty Grand located at 25 British Columbia Rd., Exhibition Place in Toronto, Ontario.