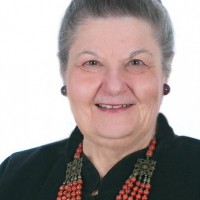 There is no doubt about it Savelia Curniski likes a challenge. Savelia completed a Bachelor of Arts and Bachelor of Education Degree at the University of Saskatchewan in Saskatoon. She then went on to do Masters Studies in Curriculum Development.

While a student in the university in the 1970’s, Savelia realized her passion for visiting, pioneer Orthodox and Catholic churches and documented 150 churches in rural Saskatchewan. The project is now housed in the Canadian Centre for Folk Culture Studies in Ottawa.

Savelia travelled extensively but the most significant was a trip she took in 1990 to Ukraine. What an exciting time to walk in the village of her grandparents who came to Canada in the early 1900’s. Her travels in Ukraine deepened her awareness not only of the opportunities but also of the needs of Ukrainian society. In 1998, she contacted the president of Chalice as she desperately wanted this Canadian sponsorship program to take poor and orphaned Ukrainian children under their umbrella. To date this Canadian support has gone far to ease the poverty of over 3,500 children.

In 2004, Savelia saw first-hand human trafficking in Ukraine. She was both appalled and shocked. She asked how this modern-day slavery could be alive and thriving in the 21st Century. Therefore, after a few phone calls to friends and acquaintances, the charity NASHI was formed around her kitchen table. NASHI is a group of volunteers dedicated to making Canadians aware of human trafficking and the building of a safe house for at-risk young girls in Ukraine known as the “Maple Leaf House”.

While at the safe-house, the young girls are helped to be healed from previous abuses. They are helped to prepare themselves for a future of their own choosing. Today sexual predators are targeting girls as young as 6 years old in Ukraine where they are bought and sent all over the world.

As the co-founder of NASHI, Savelia was recognized for the above initiatives by the Governor General of Canada at a ‘People of Courage’ Luncheon in 2007 in Regina and by appointment to significant Canadian national bodies. Minister Goodale recently appointed her to a Federal fifteen-member advisory body for a Cross-Cultural Roundtable on Public Security in Canada. She also serves on the Canadian Council of Churches Committee on Human Trafficking in Canada. The Ukrainian Canadian Congress of Saskatchewan in 2017 awarded Savelia with the Nation Builder’s Award again for her humanitarian work in bringing this travesty of human trafficking to the attention of many Canadians. Savelia and Victor Malarek played integral roles in the production of NASHI’S second documentary: ONE PEROGY AT A TIME: THE SEQUEL launched and shown in various cities throughout Canada.

In 2009, Savelia received the Holy Great Martyr Award of St. Barbara for her dedication to a humanitarian crisis in Ukraine. In 2019, she was invited by the Patriarch of Constantinople to do a presentation on human trafficking. The summer of 2019, she also received the Award of St. Nicholas the Wonder-Worker. This order is the highest award of the Foundation of International Awards, registered in Ukraine under the auspice of the United Nations.

Savelia believes she has been blessed with being given the opportunity to be born and live in Canada and being able to pursue all these adventures. Savelia’s life has been packed with challenges and excitement. It has been wonderful! She awaits new challenges and new adventures.