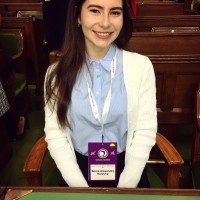 Sonia Kulycky has been an active member of the Montreal Ukrainian community since childhood. She is a member of the Troyanda Dance Ensemble and the “Rossa” Vocal trio, performing across North America and featured in the Canadian documentary “SPIVANKA”. Their 2015 CD release features interpretations of Ukrainian songs in unique harmony.

Sonia graduated from the Sheptycky Ukrainian School in 2013 at the top of her class earning her the bursary award and remained as an assistant, and later “sadochok” teacher. She also won two Montreal Ukrainian Canadian Congress essay awards (2015, 2017).

Sonia had the honour of representing the federal riding of NDG – Westmount at this year’s Daughters of the Vote conference on Parliament Hill, also receiving the Rosemary Speirs Leadership Grant to advance her initiative to implement the use of biodegradable medical examination gloves in hospitals. She was a regional reviewer for Canada’s Volunteer Awards, as well as an orientation volunteer in both the Intensive Care Unit and the Hospital Elder Life Program at the Jewish General Hospital. She currently volunteers at the Montreal SPCA.

An accomplished figure skater, Sonia is a certified coach, sharing her love for the sport with the youth she teachers. Sonia is currently pursuing her Bachelor’s of Science in Nursing at McGill University and plans to further her studies in healthcare. Her high academic achievements and community involvement were reflected when she won the Quebec Lieutenant Governor General Medal (the Hon. Pierre Duchesne) in 2014. She looks forward to continuing to pursue her passions while proudly representing her Ukrainian heritage.