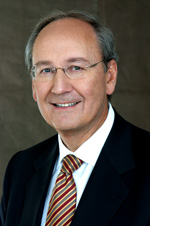 “I am proud to announce the appointment of such a prominent Canadian to this important advisory body,” said Mr. Grod. “I am grateful that Mr. Temerty has agreed to serve the community in this important capacity and I am confident that Jim Temerty will provide invaluable advice and perspectives, while contributing to the work of the Ukrainian Canadian Congress. I look forward to his insight and assistance in implementing the priorities of the organization.”

Mr. Temerty is Chairman of the Board of Trustees of Northland Power Income Fund. Previously, Mr. Temerty owned and operated the world’s largest privately held chain of ComputerLand stores. Prior to that, he held numerous positions with IBM in Canada and the US and assisted in the founding of Softchoice Corporation and served as its Chair for 15 years.

Mr. Temerty has been an active community leader and has played instrumental roles in philanthropy. He was chairman of the Ukrainian Centennial Fundraising Campaign, a member of the Sunnybrook Hospital Foundation Governing Council, Co-Chair of the Havergal College Capital Campaign, a director of the Toronto Symphony Orchestra and the Canadian Psychiatric Research Foundation.

Internationally, he was instrumental in launching the Kyiv Mohyla Business School of which he serves as Chairman of the Advisory Council. He chaired the Ukrainian Election Observers Campaign, facilitating 500 private sector election observers to the 2004 Orange Revolution presidential election. He is a donor and Trustee of the Children’s Hospital of the Future in Kyiv, Ukraine.

From 2002 to 2009, Mr. Temerty served as Chairman of the Royal Ontario Museum Board of Governors. Mr. Temerty is a recipient of many honours including Member of the Order of Canada and recipient of UCC’s Shevchenko Medal. He has been married 42 years to Louise Arcand Temerty, and has two daughters Melissa and Leah.

The Ukrainian Canadian Congress (Congress) is the voice of Canada’s Ukrainian community. The Congress brings together under one umbrella all the national, provincial and local Ukrainian Canadian organizations. Together with its member organizations, the UCC has been leading, coordinating and representing the interests of one of Canada’s largest ethnic communities (1.2 million) for 70 years and instrumental in shaping Canada’s social, economic and political landscape.

The UCC Advisory Council is comprised of prominent and exemplary supporters of the Ukrainian Canadian community who provide on-going advice and support to help the Congress and by extension the community to realize its potential and ensure its future success.