Montreal Lithuanian Commemoration of the 100th Anniversary of the Declaration of Independence27 February 2018
February 27, 2018in Holodomor 0 Likes 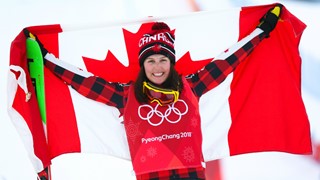 Team Canada brought home the most medals in Canada’s winter Olympic history – 29, including 11 golds! Canada finished third in the medal standings, behind only Norway and Germany.

Kelsey Serwa, who won the Olympic gold in womens’ ski cross has deep Ukrainian Canadian roots in Manitoba and BC. We joined the whole country in cheering for her and for all of Canada’s Olympic athletes!

“On behalf of Canada’s Ukrainian community, I congratulate all the athletes who worked so hard and represented Canada so brilliantly,” stated Paul Grod, National President of the UCC. “We are proud of you all!”

We look forward to cheering on Canada’s Paralympic Team during the Paralympic Winter Games, being held March 9-18 in PyeongChang.