Day of Unity of Ukraine21 January 2021Next

January 21, 2021. Ottawa, ON. The Ukrainian Canadian Congress (UCC) is pleased to welcome Senator Donna Dasko as a new member of the UCC’s Advisory Council. 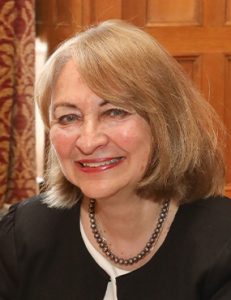 “We are very pleased to welcome Senator Donna Dasko to the UCC Advisory Council,” said Alexandra Chyczij, UCC National President. “She is an accomplished professional and we look forward to working with her to support and grow our community.”

Members of the Advisory Council are nationally recognized and respected Canadians who provide strategic guidance, expertise and cognitive strengths to help shape the current and future priorities of the Ukrainian Canadian community and who provide meaningful input and support to the UCC as the umbrella organization for one of the most dynamic and influential communities in Canada

To learn more about the UCC Advisory Council and its accomplished members please click here.
About Senator Donna Dasko

Donna Dasko was appointed to the Senate by Prime Minister Justin Trudeau on June 6, 2018. She is a respected national pollster, media commentator, and private sector business leader with considerable public policy experience. She holds a Ph.D. and MA from the University of Toronto and a BA (Hons) from the University of Manitoba.

Senator Dasko was formerly Senior Vice-President of Environics Research Group Ltd, and built the firm from a small consultancy into one of Canada’s leading research firms. During her career, she led major research studies for federal and provincial departments and agencies, private sector clients, and NGOs, in areas including the economy, budget priorities, tobacco control, health promotion, national unity, and many others. She was a leader in developing media-sponsored polling including the Globe-Environics Poll and election and special feature polling for the CBC.

As a community volunteer, she served in many roles including President of St. Stephen’s Community House, Director of the United Way of Greater Toronto, Governor of the Canadian Unity Council (devoted to Canadian unity and federalism), Chair of the National CEO Roundtable for the Alzheimer Society, and Advisor to GreenPac (which promotes environmental leadership).

Senator Dasko’s passion for the promotion of women in politics has guided much of her advocacy. She is a Co-Founder and former National Chair of Equal Voice, a non-partisan organization aimed at electing more women in Canada. She currently serves on the Board of Directors of Women’s Legal Education and Action Fund (LEAF), which promotes equality rights for women. In 2015, she co-founded the Campaign for an Equal Senate for Canada, an initiative to promote a gender-equal Senate. She works with National Democratic Institute on issues related to women in politics internationally.

She is a Senior Fellow at the University of Toronto’s Munk School of Global Affairs and Public Policy and taught in its Master’s program before her Senate appointment. She is a member of Statistics Canada’s Advisory Committee on Social Conditions.

Senator Dasko was born and raised in Winnipeg and is a third-generation Ukrainian Canadian on her father’s side. She has two children, a daughter and son.