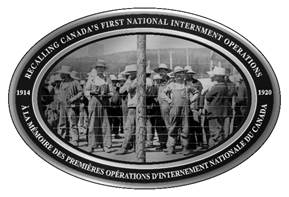 For Immediate Release (Ottawa – 26 January 2014)
To mark the 100th anniversary of Canada’s first national internment operations of 1914-1920, the Ukrainian Canadian Civil Liberties Foundation (www.ucclf.ca) will be unveiling 100 plaques on Friday, 22 August 2014, the 100th anniversary of the War Measures Act.
This initiative, the CTO (“One Hundred”) project, enjoys the financial support of the UCCLF and of the Endowment Council of the Canadian First World War Internment Recognition Fund (www.internmentcanada.ca).
All 100 plaques will be unveiled at 11 am (local time) in Ukrainian, Croatian, Serbian, German, and Hungarian churches and cultural centres, as well as in local and regional museums and other public venues, creating a “wave” of unveilings, moving from east to west, from coast to coast.
Dr Lubomyr Luciuk, the CTO project leader, said: “Beginning in 1994, the Ukrainian Canadian Civil Liberties Association (www.uccla.ca) began placing historical markers to recall the internment operations, hoping to eventually have a plaque at each of the 24 camp sites. We started with Kingston’s own Fort Henry, the location of Canada’s first permanent internment camp. Over the course of some 20 years our volunteers and supporters have made sure each internment camp location has been marked. The CTO project builds on UCCLA’s foundational work. These plaques will hallow the memory of all of the victims of the internment operations and help educate our fellow Canadians about a little-known episode in Canada’s national history. That fulfils the mandate of the Canadian First World War Internment Recognition Fund and of the UCCLF.
I want to add that this is the first time in Canadian history that any community has attempted to unveil 100 historical plaques from coast to coast at the same (local) time. This couldn’t happen without the enthusiastic support of hundreds of volunteers in 100 communities across the country, from Amherst, Nova Scotia to Nanaimo, British Columbia, and Grand Prairie, Alberta to Val D’Or, Quebec to name but a few. We’re also very grateful to our Patriarch, the two Metropolitans, the national executive of the Ukrainian Canadian Congress, the representatives of the other affected communities and many of our internee descendants, for their help.
We’re calling on people to set aside 11 am (local time) on Friday, 22 August 2014 so that they can join us in witnessing a plaque unveiling in their own community or region. Be there to remember, and to learn.”
The UCCLF and CFWWIRF will be publishing a list of all CTO plaque locations before April 2014.
For more information please contact: Dr Lubomyr Luciuk
luciuk@uccla.ca