The Ukrainian Canadian Congress was deeply saddened to learn of the passing of Dr. John Skrypuch, former President of UCC Brantford Branch. We ask God to remember him and all of Dr. Skrypuch’s family during this difficult time and to grant John eternal life in His Heavenly home.
Dr. John Skrypuch 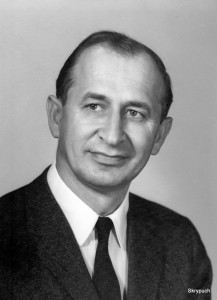 May 3, 1922 – October 19, 2015
It is with great sorrow that the family announces the passing of Dr. John Stefan Skrypuch in his 94rd year in the early hours of October 19 at Charlotte Villa, Brantford Ontario. Loving husband for 59 years to the late Lidia Skrypuch (2008), affectionate father to Orest and his wife Marsha and Roman and his wife Lori. Doting grandfather to Neil, Daniel and Nicole.
Born May 3, 1922 in Drohobych, Ukraine, to Ilia and Ivanna (nee Kotsiuba) Skrypuch. Brother of the late Daria and Taras.
As a youth, John lived through two hostile occupations of his homeland, first Soviet in 1939, then Nazi in 1941. Under both regimes, Ukrainians were subjected to terror. John narrowly escaped death at the hands of both the Soviets and the Nazis.
The last time he saw his mother was when she passed him a package of crepes through the train window in 1941 as he escaped Nazi conscription.
John was accepted into medical school in Lviv, but could not continue his studies because of the war. During the war he kept a low profile, doing heavy labour for German farmers in remote communities until he could get to a Displaced Persons’ camp. He survived starvation and typhus and was finally allowed to complete his medical degree in German in Heidelberg in 1949 on condition that he not practice in Germany.
He met Lidia Krawchuk, a young pharmacy student, while living in a DP camp. They were married in 1949 and came to Canada shortly after, first living in Montreal, then moving to London Ontario where he did his medical internship, this time in English. He completed an anesthesia residency in Kitchener.
He and Lidia settled in Brantford in 1954 and he began his medical practice. Two years later he was in charge of the anesthesiology department at St. Joseph’s hospital and two years after that he also took charge of the anesthesiology department at Brantford General Hospital.
Dr. John Skrypuch was the long-time president of the Ukrainian Canadian Congress, Brantford Branch, the president of the laymen’s committee of the Ukrainian Catholic Church of St. John, and president of the Ukrainian Medical Association in Toronto. For his longstanding volunteer work he was honoured with the order of St. Sylvester in Rome.
John retired from his medical practice in 2000 at age 78. That same year he took up walking at the Lion’s Club in Brantford and for the next 14 years walked a mile a day. After the death of his wife in 2008 he learned to cook, his specialty being chicken soup. He was able to live in his own home until the spring of 2015 with the devoted assistance of his family, live-in caregiver Rhea Fuentes, and long-time helper Linda Yaremy Barker.
The family wishes to thank the staff of Charlotte Villa for their kind and compassionate care.
Donations can be made in his memory to the Canada Ukraine Foundation, either the Ukraine Rebuilding Fund or the CUF Medical Mission:
Canada-Ukraine Foundation
145 Evans Avenue, Suite 300
Toronto, ON | M8Z 5X8
Canada
Конґрес Українців Канади глибоко сумує з приводу смерті др. Івана Скрипуха
Конґрес Українців Канади глибоко сумує з приводу смерті др. Івана Скрипуха – видатного діяча української громади у Канаді. У цей важкий час, ми просимо Господа пам’ятати про сім’ю др. Скрипуха і дарувати покійному вічне життя у Господьному Царстві.
др. Іван Скрупих