“Thank you to Mr. Weaver for introducing this Act, which recognizes the Holodomor as a Genocide of the Ukrainian people, and officially establishes the fourth Saturday of November as the Holodomor Memorial Day in British Columbia,” stated Natalie Jatskevich, President of the UCC BC Provincial Council. “We commend the Government of BC and all members of the BC Legislative Assembly for their support of this important recognition. Through honouring the millions of victims of the Holodomor, let us work together to ensure that such horrendous crimes are never repeated.” 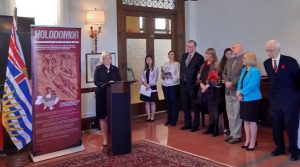 To view Mr. Weaver’s moving address to the Legislative Assembly of British Columbia during the second reading of Ukrainian Famine and Genocide (Holodomor) Memorial Day on October 28, please see below:

In 2008, the Government of Canada recognized the Holodomor as an act of Genocide against the Ukrainian people and established the fourth Saturday of November as the National Ukrainian Famine and Genocide (Holodomor) Memorial Day. The provinces of Alberta, Saskatchewan, Manitoba, Ontario and Quebec have adopted similar legislation.